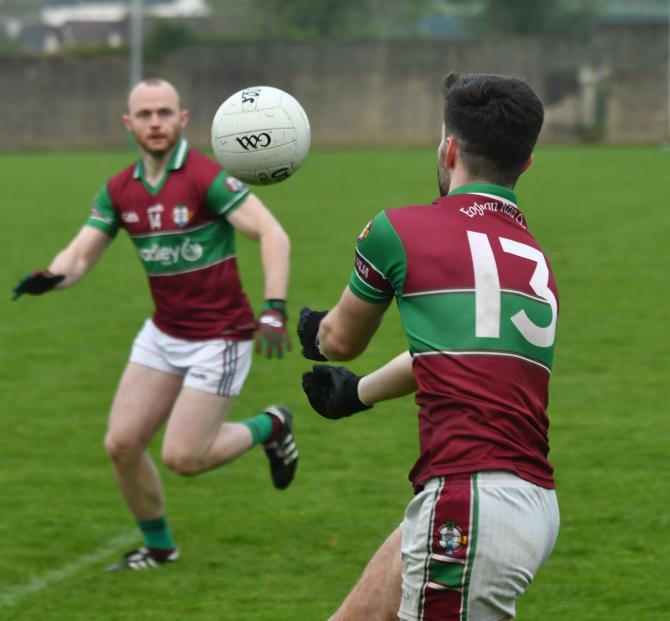 Eoghan Rua Coleraine are away to Bellaghy in the latest round of senior league games on Saturday.

DUE TO the Ulster semi-final clash between Derry and Monaghan at Armagh on Sunday, Senior League games have been moved back to Saturday.
Clubs always have the option if agreed by both teams to play the games in and around the weekends.
Despite there being little at stake with clubs having players in the county squads these games have been well attended.
No teams takes it easy but on the plus side it does give managers the opportunity to try out fringe players.

Kilrea v Claudy
Claudy’s poor form look set to continue as they make the trip to Pearse Park to face a lively Kilrea outfit who will be pretty pleased with how their team is progressing.
Claudy have scored just one victory in the past 15 months and the expected improvement after beating Newbridge last year in the promotion play-off has not materialised.
Kilrea, with a core of solid and experienced players, have been able to draft in some young and skilful players like Oran McLarnon and PJ McAleese.
Claudy just do not have that luxury and on all known form it must be Kilrea.

Steelstown v Lavey
Steelstown, who have not yet returned to full training, have got a whiff of what life is like among the big boys but they will not be unduly worried as they go through the motions.
After the highs of last year they are planning to get things really up and running coming closer to the championship.
Lavey will be happy enough with their performances to date, given that between the two county squads in football and hurling they have been playing without up to nine regulars.
It is a chance for the Brian Og’s to get a brace of points but, so far, they have fallen short against the established senior teams.

Ballinascreen v The Loup
Ballinascreen teams have been going well on all fronts so far this season and they will travel to unpredictable Loup confident of keeping up that good run.
Former county minor star John Paul Devlin has really developed into a top forward at senior level and has been consistently getting good scores.
Winning the Ulster senior club league seems to have given the St. Colm’s a confidence boost. For years they have under performed and if they an keep up their current form it could be a good season.

Slaughtneil v Dungiven
The last time Dungiven beat Slaughtneil at senior level most of their current players were wearing primary school blazers.
Given the absence of the bulk of the Slaughtneil team, who are on county duty, the door is open for Geoffrey McGonigle’s young charges to continue their good run so far.
Their young side is beginning to make progress but, given that the current league is not a serious competition, their progress will be marked around August time when the serious business begins.
The leadership of Conor Murphy should see the St. Canice’s take the points.

Ballinderry v Magherafelt
Ballinderry are not the force of old but their spirit never wanes no matter what level they are playing at.
They would only have a fraction of the players that the Rossas have but that will not prevent them from making Magherafelt’s trip to ‘The Bridge’ a difficult one.
The new management of Damian Barton and Brian McGuckin have been sifting through their big squad in an effort to find a winning combination.
They will not be unduly worried by inconsistent results. The championship is the big target when they have their full squad after county games finish.
It should be a close enough game but Ballinderry look to have two key forwards in Ryan Bell and Daniel McKinless. This pair could tilt the game in the Shamrock’s direction.

Banagher v Newbridge
Banagher will be slight favourites to get a victory at Father McNally Park, Feeny, over a Newbridge team that is sitting near the bottom of the table.
Their problem lies in poor forward play, having scored just an average of eight points per game.
Banagher, still without Mark Lynch and their county hurlers, will be happy enough with how things are going.
They have been able to bring in some good young players with a positive return.
Tiernan Moore has been a consistent scoring forward for them in recent years and, with home advantage, they can finish in front.

Bellaghy v Eoghan Rua
Bellaghy have shown a bit of an improvement under returning boss Damian Cassidy. His young side will face the north coast men with Sean McGoldrick and Sean McLaughlin in charge after 18 years.
The call for the introduction of more youth into the Eoghan Rua team has been answered in style, with five free scoring young men in the front six with Colm McGoldrick at full forward steering the ship.
It should be an open and entertaining game with the Bannsiders slight favourites. Bellaghy have had a few frustrating years but if they continue to keep faith in their younger players their day will come.