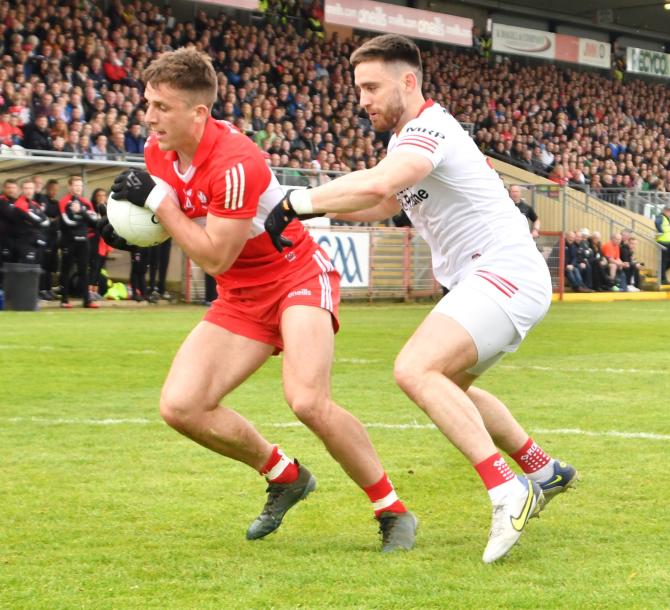 JUBILANT DERRY manager Rory Gallagher says his players must capitalise on last Sunday’s headline grabbing win over All Ireland champions Tyrone.
The Oak Leafs produced a staggering performance to consign the Sam Maguire holders to the qualifiers on a dramatic afternoon in Omagh.
For Derry it’s a semi-final meeting with Monaghan in two weeks’ time; for Tyrone, it's the back door route if they want to successfully defend their All Ireland title.
“It was an unbelievable performance in a lot of ways,” admitted Fermanagh man Gallagher.
“We are just delighted that the boys have shown they can stand up and win on a big Championship day, it is a very nice place to be as a footballer and something you should never take for granted.
“To be afforded the opportunity to play on a day like this with a crowd of boys that you love hanging about with and enjoy playing with, it is a very rewarding experience.
“You need championship wins in Ulster and you have to beat top teams. We have done it today but we also have to learn from this, move on and see where we are at now for the semi-final,” he added.
Derry’s cause was helped with the first half sending off of Tyrone’s Brian Kennedy but the Derry boss believes his side were already in control when the midfielder saw red.
“I felt going down to 14 men in the modern game isn't easy but I felt that we were in fair control of the game. We produced a lot of good football but obviously the red card had a big impact in our ability to run away with it then.”
He also believes his players showed great maturity in the performance.
“Shane McGuigan is an unbelievable footballer but Niall Loughlin has shown some good form. It's just me but I believe, no more than defending, attacking is also a team sport and we worked very, very hard on that and I think it is starting to pay off.

“I'd like to think had we beaten Galway that people might have thought of us differently coming in but I'm not really concerned either.
“ I can understand. It is a very difficult situation to be in, eight, nine or 10 points down, but these things happen to teams and we stayed calm after the Galway match. We stayed together and learned from it and we just have to push on from this now.
“We would feel we are good enough but this is only the start of a journey now, it is up to us to capitalise on it.
“Look, I have no doubt that myself, the management team and the players will all handle this right. It will be no big deal. We will enjoy ourselves tonight, have a bit of fun - I've told our boys to bring their 'going out shirts'. We'll enjoy ourselves this evening, recover tomorrow and we'll move on.”
Derry now have a fortnight to prepare for a last four meeting with Monaghan, Derry’s first at this stage of the competition in seven years.
“It is funny how things go. I was on the other team that day in 2015 (Derry's last Ulster semi-final) when we beat them. Life is funny like that but no, we will really, really look forward to it. We have two more week's championship preparation now and that will be the key.
“We want big days out. We have to enjoy them and push on, making sure they are consistent in performances and consistent in hunger to play for each other.
“I don't believe Tyrone were at the level they were at last year so we have to put that into perspective. It is not easy to come back as All Ireland champions.
“I think they have a great chance of learning now and are smart enough to learn from it but look, we will worry about ourselves now.
“The potential of this Derry team is to enjoy tonight and then knuckle down and start working tomorrow again.
“That's all I want.”

* Full preview of next Sunday's SFC semi-final against Monaghan in Tuesday's Chronicle newspaper.