Six of the best as Saffrons hurlers get better of Down 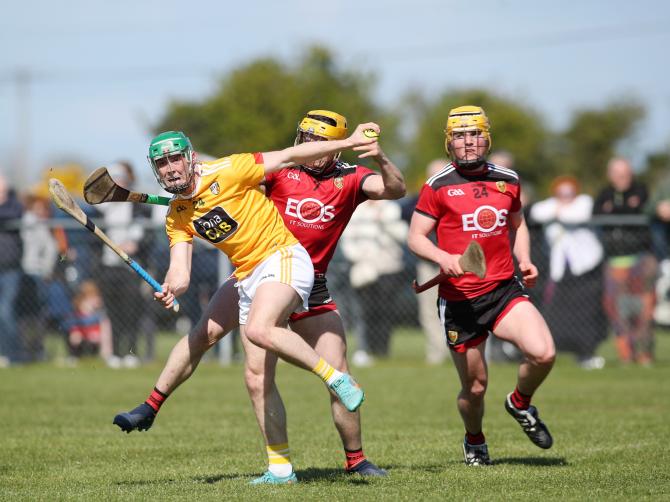 ANTRIM’S hurlers produced six of the best against Down in Ballycran as they made abundantly clear their Joe McDonagh Cup intentions.
Having taken account of Offaly in round one, Down became their second victims in this nine goal thriller.
It was a hugely impressive performance from the Saffrons who made a lightning start to the contest and maintained control throughout.
Darren Gleeson’s men scored 5-12 from open play and a list of ten different scorers against a Down side who were full of confidence following their win against Kerry just seven days previous.
The Saffrons goals came from Ciaran Clarke and Seaan Elliott who had double strikes and singles from Domhnall Nugent and Conor Johnston with Conal Cunning shipping in with ten points.
Down struggled to get to grips with this game, Antrim’s interplay and conditioning looked superior on the day and while the home side had moments of joy they were few and far between.
Their goals all came in the second half with Eoghan Sands bagging a couple and substitute Chris Egan also on target.
The Saffrons will look at the three goals they conceded in the second half as cause for concern and will certainly be looking to eradicate any sloppiness as they plan ahead for the visit of Carlow.
The goals showcased the best Antrim has to offer. The first came straight from the throw in with Maskey marauding through the middle before playing Clarke in and the Ballycastle star hammered home after just ten seconds.
With five between the sides after 13 minutes Seaan Elliott scored his first goal. Niall O’Connor delivered a long ball which broke loose and Elliott finished with ease.
Eleven points separated the sides at the interval with Antrim ahead 2-13 to 0-8 and the Saffrons made another dream start, scoring a goal and two points, inside the opening four minutes of the second half.
Elliott ripping through the Down defence and clearly with goal on his mind was tripped by Sean McManus. The Down full-back received a black card and Antrim received a penalty with Clarke sending Stephen Keith the wrong way.
The fourth goal came from Elliott with Clarke proving the assist, putting 16 points between the sides as the game hit the final quarter.
Down made a comeback of sorts with a couple of goals coming in less than five minutes, substitute Chris Egan with the first and Eoghan Sands picking up number two.
Any thoughts of the home side clawing their way back soon dissipated when McManus picked out Conor Johnston who side stepped Keith in the Down goals before finishing.
With their lead reduced to 12 at this stage Domhnall Nugent scored the goal his performance deserved, the bustling St John’s player brushing aside three Down players to crash home goal number six for a comfortable fifteen point victory.
Antrim: Ryan Elliott; Phelim Duffin, Gerard Walsh (0-1), Niall O’Connor; Paddy Burke (0-1), Eoghan Campbell, Ryan McGarry; Joe Maskey (0-1), Conal Cunning (0-10); James McNaughton, Domhnall Nugent (1-2), Conor McCann (0-2); Seaan Elliott (2-1), Ciaran Clarke (2-1), Conor Johnston (1-2)
Substitutions: Neil McManus for J McNaughton; Eoin O’Neill for C McCann; Matthew Donnelly for N O’Connor; Daniel McKernan (0-1) for J Maskey; Conal Bohill for S Elliott.
Down: Stephen Keith; Michael Hughes, John McManus, Tom Murray; Matt Conlon (0-1), Conor Woods, Caolan Taggart; Pearse Og McCrickard (0-2), Liam Savage; Marc Fisher (0-1), Paul Sheehan (0-2), Jordan Doran; Daithai Sands (0-4), Darragh Mallon, Eoghan Sands (2-0)
Substitutions: Gerard Hughes (0-1) for J Doran; Chris Egan (1-2) for P Sheehan; Declan McCartney for D Mallon; Padraig Doran (0-2) for M Fisher; Oisin McManus (0-1) for P Og McCrickard.
Referee: John Keenan (Wicklow)