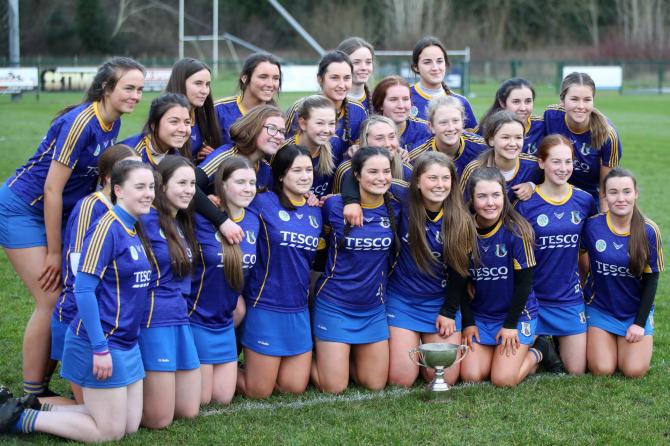 THE Fr Davis Cup returned to Garron Tower thanks to goals from Ciara O'Boyle, Kady McNeill, Monique O'Boyle and Niamh Graham as St Killian’s stole the show at the Loup.

Following a five year absence, the Ulster College's B Camogie championship returned to the Glens, a great showing rewarded with a five point victory against St Patrick’s Keady.

Ahead by 1-3 to 0-5 in a low scoring first half the girls from the Tower hit their stride in an absorbing second half, but they were pushed to the limit before getting over the line against this strong county Armagh side.

After opening a five point gap going into the second half water break St Killian’s were pegged back when Keady full forward Sinead Quinn grabbed her team’s only goal and when Katie Doyle and Katie Crilly added points the Keady girls were back on terms.

Everything was certainly in the melting pot at this late stage but the girls from the Tower dug deep and when left half forward Kady McNeill put Cara O’Boyle clear, the midfielder grabbed her team’s fourth goal.

Fired up now they slung over and three more points to seal the Fr Davies cup for the fourth time.

Keady went ahead in the early stages of this final with a point from a Katie Doyle free, but right half forward Orlaith McAlister had St Killian’s level soon afterwards.

The north Antrim school then edged ahead but Keady were back on terms at two each by the first half water break and the early indications were that this one was going right to the wire.

When Monique O’Boyle got St Killian’s opening goal early in the second quarter the Tower girls looked on the right track but the Keady side refused to budge and came battling back to trail by just a single point at the interval,1-3 to 0-5.

When Katie Doyle, St Patrick’s top scorer, levelled matters on the restart, the Tower had a battle on their hands but the second of their four goal haul came to their rescue.

Kady McNeill fired home after being set up by Niamh Graham and when Graham got in for her team’s third goal there was a some daylight between the sides.

However there was just no shaking off this well drilled St Patrick’s side and when Quinn bagged their only goal of the hour to level the game this tense final was far from settled.

Once again, a goal came to the Tower’s rescue, this time Cara O'Boyle on target and they pushed in for a five point victory and now face Scoil Cháitríona in the All-Ireland quarter-final in Dublin at the weekend.