Win sets up weekend meeting with Donegal in Portglenone 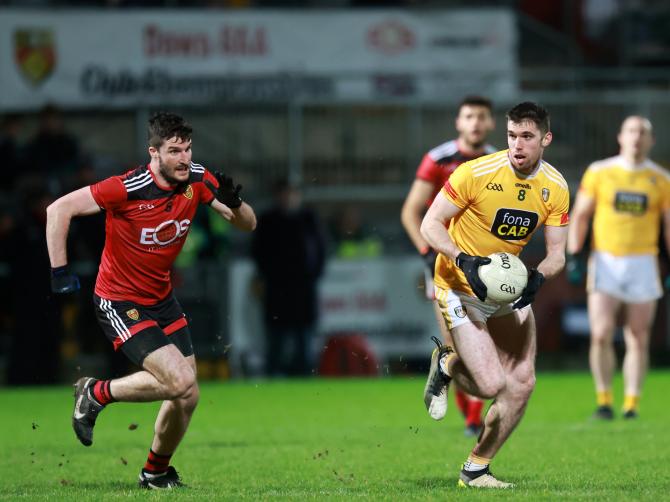 Antrim's Kevin Small in action against Down in the McKenna Cup first round game in Newry. Pic by John McIlwaine

The Dr. McKenna Cup has been held in scant regard by many of the Ulster teams, using it as an event to blood new players and generally get things in place for the upcoming National League and championship.

With its demise imminent, however, suddenly it has taken on a new importance in the light of the new 28 week county season and certainly the Saffrons have gone about it with renewed vigour,

While manager Enda McGinley may still use it as a forward planner, he threw everything into this opening game against Down at Newry and came away with a victory, making the weekend game against Donegal in section A of much greater significence.

Saturday's game, throw-in 1.30pm, was originally to have been played in Portglenone but the game has now been switched to Belfast's Corrigan Park.

But back to the opening game at Pairc Esler in Newry where, despite trailing to an early Ryan O’Higgins goal, the Saffrons led at the break thanks to a couple of late Ruairi McCann frees.

An early Patrick McBride goal looked to have given his side some breathing space in the second half - though Down levelled the game at 1-9 apiece with ten minutes remaining.

McGinley’s men finished strong with substitutes and brothers Conor and Ryan Murray scoring either side of a second Patrick McBride point.

They did have to survive some late pressure though but ultimately got the job done and head into their final group game with Donegal with a spring in their step.

Antrim started brighter without registering a score in Newry with Tomas McCann and Ruairi McCann both off target before the games opening score arrived.

The home side's Rory Burns' kick-out was claimed by Gerard Collins who claim a defensive mark. His offload to Barry O’Hagan switched the emphasis to attack and O’Hagan sold a marvellous dummy before finding the run of Ryan O’Higgins who fired beyond the reach of Oisin Kerr and into the net.

Antrim hit back through a converted Ruairi McCann free from off the ground but the Creggan forward spurned another free in the aftermath and sent a '45' off target as the Saffrons chances failed to produce scores.

An advanced mark by Odhran Eastwood resulted in the visitors second score, moments after Oisin Kerr cut-out a dangerous opportunity at the other end.

Down restored their two-point advantage from a Barry O’Hagan free that dropped in the small square finding Packie O’Hagan, a late replacement for Pat Havern, who opted for a point

At the first half water-break the sides were level after Patrick McBride kicked a magnificent point and following a nasty foul on Tomas McCann; club-mate Pat Shivers kicked the resulting free to make it 1-1 to 0-4.

The Saffrons hit the front for the first time after 22 minutes when Cargins James Laverty kicked an angled score following a nice interchange with Tomas McCann.

Kevin McKernan split the posts and levelled the game for the second time in the half and Down regained the lead after substitute Darren O’Hagan found the run of Caolan Mooney to land a point and make it 1-3 to 0-5.

Three minutes before the interval Ruairi McCann levelled with his second converted free from the ground and he quickly had the chance to edge his side ahead for the second time after referee Maggie Farrelly tried to play advantage but it didn’t materialise.

McCann didn’t pass up the opportunity and landed his first free from his hands adding another before the short whistle to lead by one at the break, 0-8 to 1-4.

McGinley's side were certainly up for their first McKenna Cup victory in a long time when they made a dream start to the second period and hit the net within the first two minutes.

Jamie Gribbin found the run of club-mate James Laverty who bore down on goal and drew the attention of Rory Burns, before slipping in Patrick McBride at the back post for a simple palm to the net and they were on their way.

Down ate into the Saffron advantage with Barry O’Hagan converting a free and then Kevin McKernan fizzed the ball over the bar after a quick charge forward.

A single point separated the sides when McKernan stretched out his leg and pierced the ball through to Darren O’Hagan to clip the ball over the bar another time.

Barry O’Hagan almost gifted a second goal to Antrim after his poor defensive clearance was seized upon by Tomas McCann who was quickly swarmed upon, he recycled possession and it eventually fell to brother Michael to land a point and restire a two point advanatage.

Antrim were perhaps guilty of trying to sit deep too early and paid the price when Barry O’Hagan won an advanced mark and converted. He then converted a free for his fourth score of the evening  and the sides were level at 1-9 each.

Going into the last ten minutes the visitors regained the lead through a fantastic score courtesy of substitute Conor Murray.

Down almost forced a goal opportunity from the next attack, Caolan Mooney slipped the ball into the path of first half goal scorer Ryan O’Higgins who tried to head for the target again, but a magnificent steal from corner forward Jamie Gribbin, back helping out his defence, turned defence into attack.

Patrick McBride steered his side into a two-point lead with his second point after Ryan Murray’s free dropped short. His  team-mates pressed eagerly and won back possession with McBride eventually picking up and driving it high between the posts.

When Murray  atoned for his earlier  miss with the insurance score to move his side three points ahead they looked home and hosed.

However, Down fought to the bitter end and a close free gave Barry O’Hagan a goal chance. Antrim crowded the line and O’Hagan sent his shot towards the crossbar with a deflection off Ricky Johnston diverting the ball over the top.

Thereafter, the Saffrons retained possession and saw the game out to begin their McKenna Cup campaign with a victory and knowing a win over Donegal in Portglenone on Saturday could see them advance to the last four of the competition.