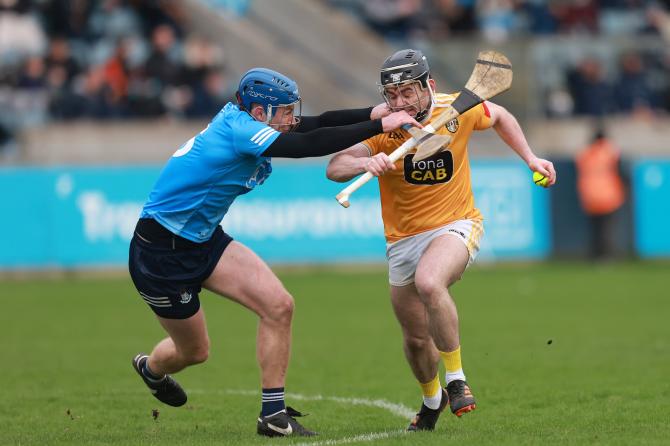 Antrim lost to Dublin in their opening Walsh Cup game.

WHEN THE Saffrons ran up a seven point lead at Parnell Park against the Dubs in this opening Walsh Cup game, manager Darren Gleeson's decision to let the Under 20s do all the donkey work in an unsuccessful Conor McGurk Cup run looked like paying off.
Bursting with enthusiasm, Deaglan Murphy’s goal had helped Antrim run up a 1-7 to 0-3 lead after 13 minutes, extended to eight a couple of minutes later, but Mattie Kenny’s charges clawed back the deficit and eventually drew level before Cian O’Sullivan found the Saffrons’ net on the eve of half-time.
It saw Dublin head in with a 1-13 to 1-11 interval lead and at the start of the second-half Colin Currie hammered in their second goal.
Donal Burke could have had the capital men’s third goal but for a brilliant save by Paul McMullan, but the Dubs still ran out comfortable winners as Currie’s frees were backed up by points from substitute Eamonn Dillon, Rian McBride and Chris Crummey late on.
This certainly was an experimental Saffron side and, while well beaten in the end, Gleeson can take some positives from the game.
Nine points separated the sides at the end of the 70 minutes in a performance that saw the Saffrons blow off the cobwebs and have plenty of positive signs for the season ahead.
Players returning, debutants, players hitting the ground running and grounds for early optimism.
A goal and 14 points from play and nine different scorers with an opening quarter that saw them run into an eight point lead by the 15th minute with a spell of a goal and seven points without reply.
The home side grew into the game and showed much the same athleticism, intensity and skills they showcased in 2021.
Chris Crummey and Rian McBride caught the eye while inside forward Colin Currie was man of the match with a goal and five of his goal and 14 point total coming from play in a superb performance.

* Full report in this week's Chronicle...