Derry champions take on Donegal opponents St. Eunan's Letterkenny in their own backyard this weekend 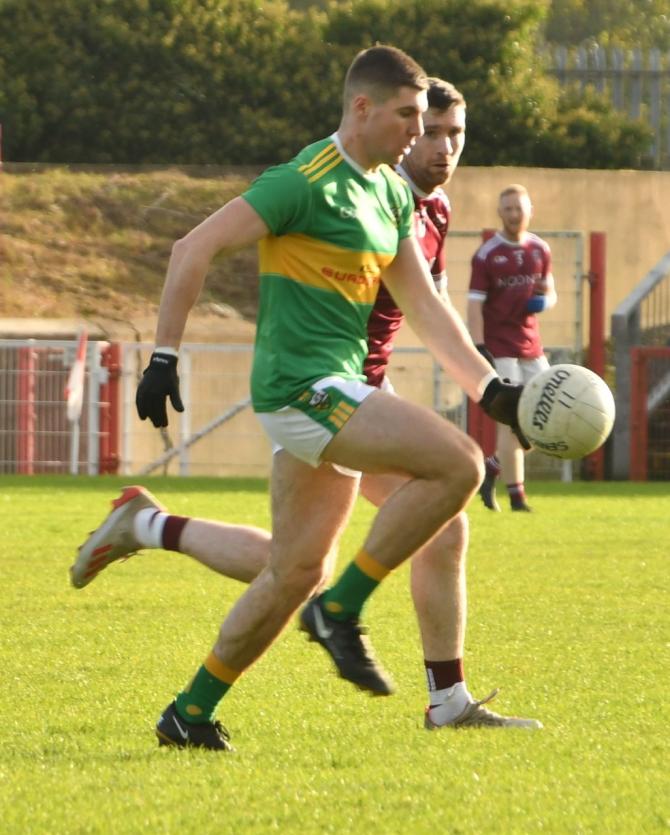 Glen will look to the strong runs of Emmet McFaul against St. Eunan's this weekend.

IT’S difficult being away in your opening championship game but, on top of that, Glen have to travel O’Donnell Park, the actual home ground of St. Eunan’s, the Donegal champions.

O’Donnell Park is an excellent facility but Glen were expecting the game to be at neutral Ballybofey.

Still on cloud nine after their first John McLaughlin Cup success, the Maghera men probably don’t care if it is played on the moon!

The prize for the winners is a quarter final game against Monaghan champions Scotstown. If Glen win they will have home advantage. If St. Eunan’s win they will travel.

St. Eunan’s are far and away the biggest club in Donegal. They field 35 teams between football, hurling and ladies football and have won multiple titles across the three grades.

They caused a big shock by winning the hurling title as well, beating hot favourites Setanta to complete the hurling football double for the first time since 1972.

Their easy 1-11 to 0-4 final win over holders Naomh Conaill was a major shock. The young Cathedral Town team ran the experienced Glenties team ragged in the second half holding them to a single point in that period. Naomh Conaill had two players sent off in the closing stages of the game.

The first half was a turgid affair with the defences just scoring a point each in the opening quarter. The Tirconnail men are likely to put up the shutters early to disrupt the slick moving Maghera men.

Like Derry, 16 teams play in the Donegal championship. They play in four groups of four.

Donegal All Ireland winner Rory Kavanagh had taken over the management of a young team and to run the favourites to two points was quite a feat.

The team was heavily laden with players from the under 18 team that had appeared in four county finals between 2015 and 2018, winning the title three times.

They improved as they went on but on the other side of the draw the other big boys were knocking each other out of the title race.

Kilcar beat Gweedore and then Naomh Conaill beat Kilcar. This left a handy road through to the final for the Letterkenny men who caused the shock of the season with that ten point win over the holders and hot favourites.

Their goalie is former Donegal custodian Shaun Patton and their key player in attack is Donegal star forward Niall O’Donnell.

It took longer than expected for Glen’s Ulster minor winning teams 2011 to 2014 to make a splash at senior level. Bringing in Malachy O’Rourke as manager was the missing link.

This year, they literally breezed through the Derry championship, conceding just 0-27 in four knockout games and scoring a massive 7-70.

Their display in the final against Slaughtneil has been described by followers of the game in the Oak Leaf county as near to perfect as perfect can be.

Whether they like it or not they will travel as very strong favourites.

That quartet of McFaul, Glass, Bradley and Doherty in the middle third will be very hard to quell. They have a very strong panel.

Indeed, Alex Doherty, a recent Derry senior player, has to be content with a place on the bench. Virtually every one of their players has represented Derry at some level.

Glen’s fitness is something to behold. They are able to run non stop and corner backs are liable to pop up in scoring positions.
In the first half of the county final centre half back Ciaran McFaul had scored three times with captain and corner back Conor Carville also sending over a point. The central attacking duo of Jack Doherty and Danny Tallon were unstoppable.

While noted manager Malachy O’Rourke is the front man of the management the quiet men in his backroom team are Ryan Porter (trainer) with former players Johnny Bradley and Michael McCullagh making up the quartet.

Glen are not likely to make any changes from their first ever county senior success.