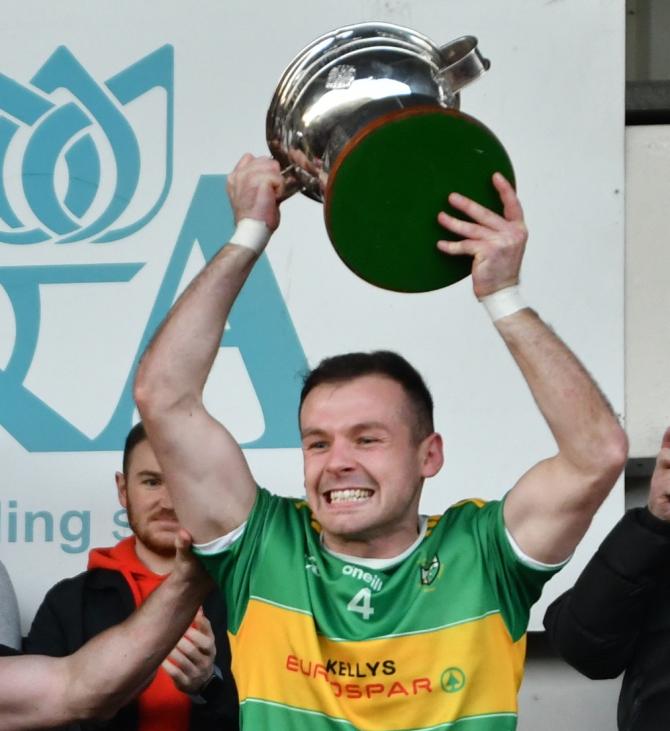 Conor Carville made history on Sunday by becoming the first Glen man to lift the John McLaughlin Cup.

WATTY Graham’s Glen ended a 73-year wait for a senior Derry football championship title on Sunday - and boy was it worth the wait!
The Maghera men produced a performance packed full of pace and power to dethrone defending champions Slaughtneil and lift the John McLaughlin Cup for the first time.
It was an awesome display from a club so often derided as the ‘nearly men’ in the Oak Leaf county.
But no more.
On this display, they will take some stopping in the provincial series, especially with the vastly experienced Malachy O’Rourke directing operations from the sideline.
The former Monaghan county manager only took over at the start of the season but he has managed to deliver on the club’s much vaunted promise to deliver a first county title.
He, of course, was in charge of Loup when they added an Ulster title to their Derry success way back in 2003 and will no doubt be looking to do the same again almost 20 years on from that unlikely success.
But that is for the future; for now, it’s about enjoying the moment and celebrating a triumph that many thought they might never see.
“Derry football is very strong and you can never look too far ahead,” admitted O’Rourke.
“I’m just delighted to get through and delighted to get the first championship for the club. A lot will depend on the next couple of weeks and how the boys get on.
“We’ll not be putting any handbrake on them for the immediate future - we’ll let them enjoy it, because that’s a big part of football as well.
“We’ll assess things at the end of the week and see how we’re going, but we’ll enjoy this one.
“Ulster is a fair bit away so we’ll enjoy this one and we’ll see how things go after that,” added the Fermanagh native.
On Sunday’s showing, Glen look well poised to usurp their neighbours and opponents on Sunday, Slaughtneil, as the pre-eminent force in Derry football.
They dominated all over the field and arguably could have won by more than the 1-13 to 0-7 final scoreline.
“The boys put in serious hard work from the start of the year and I suppose we all dreamt of a day like this that we could get over the line. When you see how much it means to so many people, it’s a great feeling,” added O’Rourke.
“We felt that the boys were going well. They were training hard and they were really focused. We had a good win in the semi-final but we always felt that there was more and we knew we would have to have more because of the tremendous experience that Slaughtneil have and their ability to win games.
“We knew we had to put in a big performance. We started the game very well and I suppose we never let go of that stranglehold we got at the start. It was a great performance and we’re delighted to get through it.
“Our display in the first half maybe merited being another couple of points in front but we kicked a couple of wides so that goal gave us that buffer that was crucial at half-time.
“I suppose it meant that if we just kept our heads in the second half and played controlled football then it was always going to be hard for them to get back into it and that’s how it turned out.”
“We were nice and relaxed coming into the game. We knew what we had to do and the boys had a hunger to win it, as you saw out there.
“At the same time we had to mix that with being relaxed, having cool heads, and doing the right thing at the right time and they managed that well.”