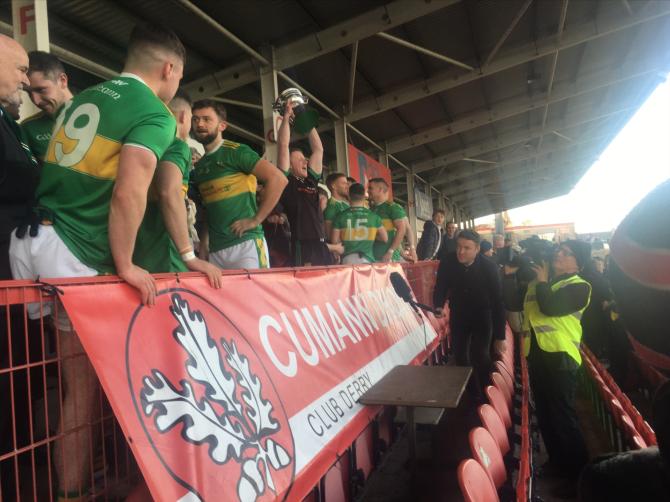 JUDGING by the scenes at the end, it was worth the wait.

Much had been in the lead up to this game about Glen's failure to win a Derry senior football championship in their long and illustrious history.

On Sunday, at a packed Celtic Park, the current crop of Maghera footballers put the record straight by lifting the John McLaughlin Cup for the first time.

And they did it in style, completing dominating defending champions and parish rivals Slaughtneil on their way to a famous 0-7 to 1-13 win.

The Watty Graham's were well worth their victory and had the game's best players in centre half back Ciaran McFaul and midfielder Conor Glass.

They were ably supported all over the field against an experienced Emmet's side who simply had no answer to the pace and power of their opponents.

The vastly experienced coach, who led unfancied Loup to a Derry title in the past, certainly appears to have the midas touch when it comes to winning championships.

Of course, Loup went on to claim the Ulster title on that occasion and on this showing provincial success must be on the radar of the newly crowned Oak Leaf champions.

But all that is for another day.

For now, all that is on the minds of players, management and supporters is celebrating an historic win - and rightly so.

Reports and pics in Tuesday's paper...