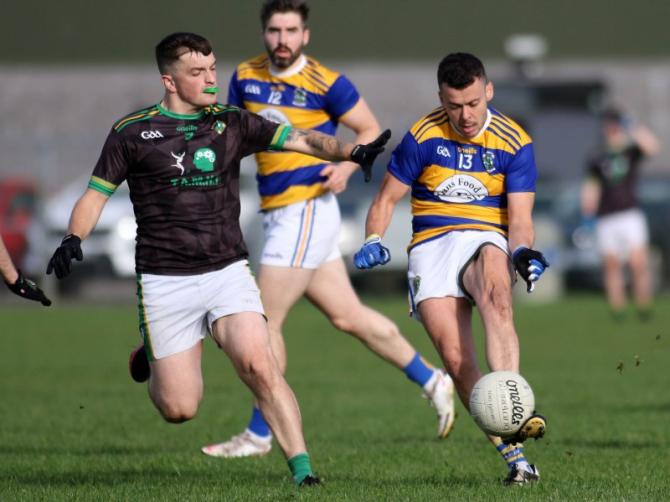 Rasharkin's Gerard O'Hagan sets himself up for another score.

RASHARKIN stood tall in the face of a determined comeback by Pearses to claim a place in the final of the Junior football championship against St Comgalls in this lively semi final encounter at Toome.

The Dreen residents - with the division three league title already tucked away - will be striving to make it a double as they tackle last year’s runners up.

The St Mary’s men were forced into last minute change right on the eve of the throw in as net minder Ryan Doherty was forced to withdraw after injuring his knee in the war up but in the even the late stand in Tiernan O’ Boyle stood tall between the posts.

Rasharkin started well and after making way for the north Belfast men to be first to score they hit back in style with a trio of points and a Conor McFerran goal to take a healthy lead.

It didn't last, however, as Pearses hit back and only a single point separated the sides at the interval, 1-7 to 0-7 in favour if the Dreen side.

Again Rasharkin forged into a comfortable lead on the restart and at 1-11 to 0-8 at the end of the third quarter they looked to have done sufficient. They again eased up and very nearly paid the price.

Pearses dominated the closing half getting back to with a point and in the nervous minutes before the final whistle it took an Andrew Hasson point to restore order and victory.

Pearses struck first with Finn Grew making their intentions known early but points from Liam Quigg and Conor Mc Ferran gave the Dreen side a lead they were never to lose..

Gerard O’Hagan the took advantage of a long delivery to finish to the net and when Quigg added another they looked well on their way.

Apparently thinking this one was there for the taking Rasharkin let things slip allowing the North Queens street side back into it.

Towering full forward Declan Hackett was causing problems for the Rasharkin rear guard from the outset as high deliveries were to prove ideal for the front man and he took advantage to knock over his sides second point in the 12th minute.

A couple of pointed frees followed in the 13th and 14th followed from Stephen Fitzsimmons and when midfielder Devine hit another there was only one between the sides at the first water break.

Rasharkin pulled their socks up with Liam Quigg leading the way and while Finn Carew responded with a Pearses score the South West side with a further rtrio of points led 1-6 to 0-6 as the change of ends approached.

Rasharkin did increase their  advantage again  nearing half time but Pearses had the last say with an injury time strike from Piaras Donaghy.

Rasharkin were first out of the traps on the restart and early scores from Darragh Quigg, Liam Quigg and the hard working Shane Hasson saw them back in charge.

Another exchange of points between  Fitzsimons  Gerard O’Hagan gave Rasharkin a six point advantage 1-11 to 0-8 at the end of the third quarter and they looked home and hosed.

Like the first half, Pearses proved a threat in the final quarter with Piaras Donaghy and Aodhan Bannon points heralding a comeback.

Rasharkin once again appeared to have lost concentration and when Liam Deggan  and replacement Naoishe Cuilin were on target Rasharkin, now just two ahead suddenly realised this was certainly not there for the taking.

When Stiophan Fitzsimons stroked over another free Rasharkin looked in big trouble but Shane Hasson won a late free, converted by Andrew Hasson and Rasharkin were in the final, but only just.