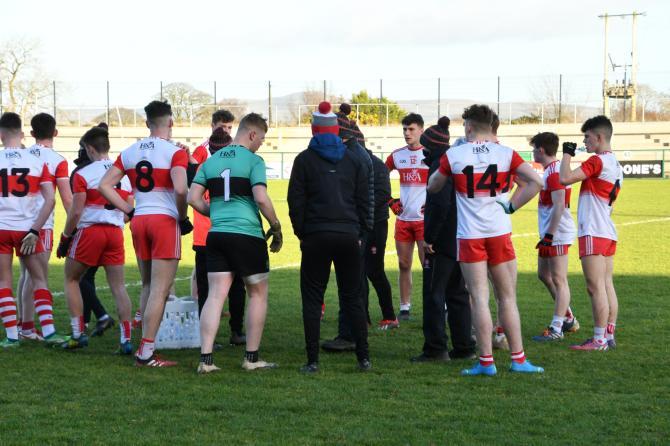 DERRY are through to their fifth Ulster minor final in the last six years following a one point victory over a battling Tyrone team at Armagh on Saturday.
They will now meet Monaghan at Omagh on Friday evening. Monaghan, the championship favourites, came close to being dumped out by unfancied Fermanagh. An added time goal by Dylan O’Reilly gave Monaghan a 3-10 to 2-10 victory in the other semi final at Breffni Park.
With a virtuoso performance from the towering Dan Higgins, Derry ruled midfield. Whether he went short or long to the sunny skies, goalkeeper Kian McGonigle found a red and white jersey on all but two occasions with his pin-point kickouts..
In a lasklustre final quarter that yielded just Tyrone scores, goalkeeper Kian McGonigle plucked Cormac Devlin's chance from above the crossbar. At the time, Derry were comfortable in everywhere but the scoreboard, but it proved an important play.
Derry did not get a score in the final 23 minute of a highly competitive game and hit ten wides over the hour. It was their fourth win over Tyrone in the last five meetings. Derry were minus several key players injured, including full back Sean Deehan and skilful half forward Calum Downey
In a first competitve outing since December, it was Tyrone who settled better and were more assured in possession early on, something that was etched in their opening score of the game. James Donaghy and Cormac Devlin were all involved in a spell of patient football before Conor Cush angled his shot over the bar.
From the kick-out, Dan Higgins stamped his early marker on the game with the first of a series of majestic catches at midfield. With Patrick O'Kane and Eoin McEvoy also to the fore, they held all the aces at midfield.
Neither team played with a defined sweeper, resulting in a free-flowing opening half played at a high tempo. It was a great advertisement for minor football. McGillion pushed Tyrone into a two-point lead and they were full value for it early on.
A short McGonigle kick-out started an attack and after Donncha Gilmore carried the ball from defence, Niall O'Donnell took possession and after taking a return pass from Patrick O'Kane he slotted over the bar.
Tyrone won the resultant kick-out, but a tackle from Lachlan Murray on Colton, in the Derry defence, started the move that led to the first goal. McEvoy, Gilmore and O'Donnell all involved before Matthew Downey finished low to the net in a crowded penalty area, putting Derry 1-2 to 0-3 ahead.
In the seven minutes before the interval, the game sparked into life with three goals. Tyrone struck first when Ruairi Campbell intercepted a Derry kick-out before floated a diagonal ball to Cormac Devlin. It was through the eye of a needle and Devlin turned inside before firing across McGonigle to the net for a 1-6 to 1-5 lead.
Derry's response was instant. McGonigle poked a kick-out into the space in defence and seconds later Eoin McDvoy was on the charge upfield where he offloaded to O'Donnell and the Ballinderry player finished expertly to the net.
Cush and Charlie Diamond – who were getting on plenty of possession – exchanged points before Derry had a chance to put daylight between the teams as the fourth official signalled for two minutes of stoppage time.
Dan Higgins intercepted a Tyrone attack and in the breakaway upfield, Murray, Diamond and Adam McGonigle powered through the gears, but when the ball ended up with Donncha Gilmore, his shot was saved by the boot of goalkeeper Morgan.
A well worked Conor McGillion goal put Tyrone 2-7 to 2-6 in front at the interval but on the run of play Derry were the far better team.
A fisted point from Lachlan Murray had the sides level before Ruairi Canavan had the ball over the bar in his first involvement since being introduced at the break. Then, just when Derry needed him, Higgins took two more delightful marks at midfield.
Murray thumped over a brilliant score on the turn, after a Higgins fetch, but Derry were still not able to shake off Tyrone. The high ball into Derry's defence was causing uncertainty and when Shiels was forced to fist to safety, goalkeeper Morgan clipped over a '45'.
Cush cut inside Shiels to hit a brilliant score and a more economical Tyrone were 2-11 to 2-10 ahead before the game swung for the final time. Eoin McEvoy powered his way through the middle and after a footblock in the Tyrone penalty area, referee O'Hare instantly awarded a penalty. Matthew Downey kicked confidently to the top corner.
In the final minute of normal time, McGillion cut the lead to a single point. Derry had two more attacks to take the sting out of the game and after failing to even make the ball go dead, they were on a knife edge and it took Morgan's late miss to win the game for Derry, a victory that should've been more comfortable.