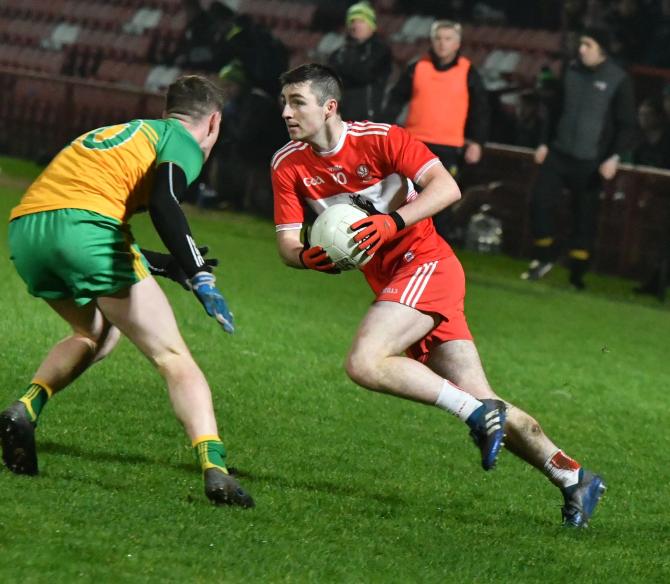 Danny Tallon in action for Derry against Donegal.

In a closely-fought first half, Declan Bonner's men held a 0-4 to 0-2 advantage through two scores by Peadar Mogan and points from Ryan Bell and Caolan Ward.

The scoring increased after the interval, with the visitors moving into a five-point lead before Ward fired home to put them further in control.

The scrappy nature of the game returned after Ward's effort, with Donegal winning by a comfortable 1-10 to 0-08 scoreline in the north-west derby.

The Red Hands will meet Down in the semi-finals after they defeated Antrim 2-17 to 0-15 to win Section B.

Donegal won Section A with a 1-10 to 0-8 victory over Derry and were due to play best runners-up, Monaghan.

However, the county announced that they had withdrawn from the competition because of player unavailability with Sunday's semi-final clashing with the Sigerson Cup.

The decision was confirmed on Thursday night with 13 of the squad in Sigerson action this weekend and a number ruled out through illness and injuries.

The Ulster GAA turned down requests for a new date from both Donegal and Down.

Donegal said it was 'a decision not taken lightly and one which we regret having to reach.'