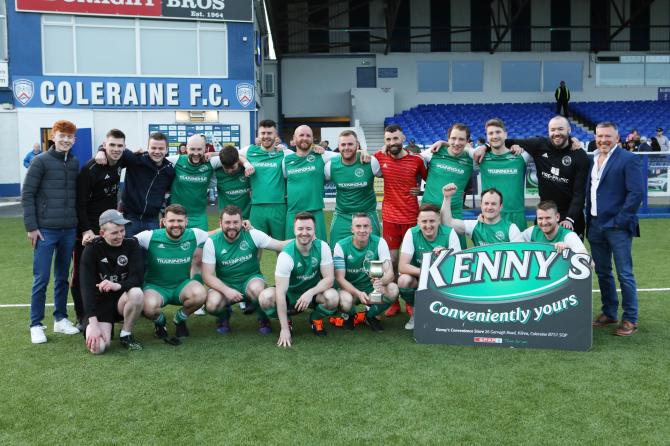 Dunlo Reserves celebrate their success at the weekend.

A FIRST half goal from Shea Tennyson was enough to win the Morning League Cup for Dunloy Reserves at the weekend.

The north Antrim men got the better off their Portrush Reserves opponents in a hard-fought game at the Coleraine Showgrounds.

It was a close game throughout where both teams enjoyed periods of dominance.

However, the only goal of the game arrived after great work from Chris Brogan and Jamie Montgomery sent Tennyson through on goal and the striker made no mistake, firing low into the corner.

Dunloy came close to adding to their tally, hitting the woodwork twice - the crossbar in the first half and an upright midway through the second period.

Portrush applied pressure as the game entered its latter stages, particularly when the winners were reduced to ten men, but a solid defensive effort ensured Dunloy held firm to lift the trophy.