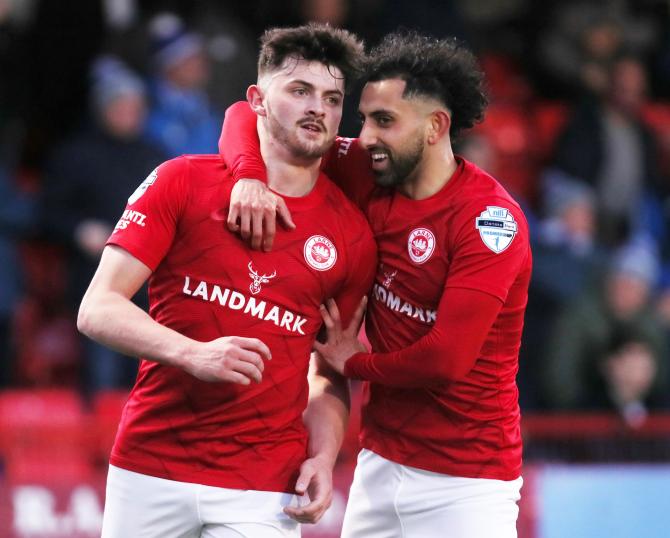 COLERAINE'S miserable away form continued at Inver Park on Friday night as they slumped to a dispiriting 3-0 defeat to Larne.

Lee Bonis scored twice and Mark Randall the other as the hosts closed the gap on fourth placed Crusaders to five points in the first of the post split games.

Coleraine remain firmly entrenched in sixth place and most observers would surely concede that this is where they will complete the regular season.

There is also little doubt that Bannsiders' boss Oran Kearney has at least one eye fixed on the end of season play-offs which will determine if the club secures European football this summer.

Failure to do so could have severe implications for one of the club's foremost 'part-time' clubs seeking to keep pace with the full-timers, including Friday night's opponents.

The manager's intentions were clear from his team selection which showed no less than six changes from that which went down 3-2 at home to Glenavon in their last game a fortnight ago.

And it was one of those recalled, veteran striker Eoin Bradley, who came close to breaking the deadlock in the first half, his header glancing off the post and wide from a Josh Carson cross.

Sixty seconds later and Gareth Deane was picking the ball out of his net after an uncharacteristic error presented Larne striker Lee Bonis with the easiest of finishes.

Coleraine remained in the contest until just before half-time when Mark Randall was allowed to break forward from midfield and arrow a low shot past Deane into the corner to double the home side's advantage.

And that was how it remained until near the end when Bonis volleyed home his second goal of the night to seal an ultimately comfortable win for Tiernan Lynch's side.

For Coleraine, it's a case of nursing players back to full fitness in time for the knock-out games at the end of the regular season.

They badly miss the ball carrying capabilities of Jamie Glackin and Conor McKendry who face a race against time to be fit for the season's denouement.