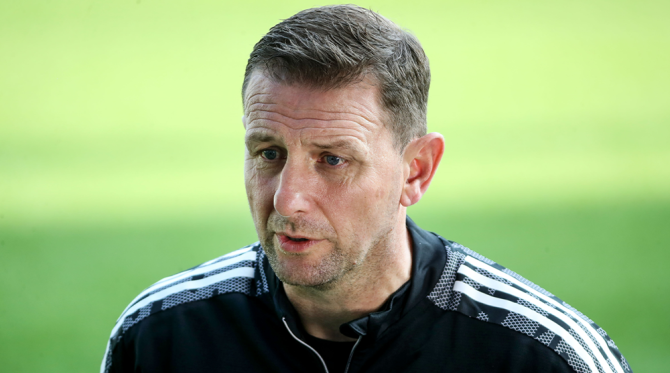 Northern Ireland manager Ian Baraclough has promised to “freshen things up” ahead of tonight’s international challenge match against Hungary in Belfast.

Baraclough was pleased with his side’s 3-1 friendly win over Luxembourg on Friday but believes there is plenty of room for improvement.

In his Manager’s View column in the matchday programme he said: “I think we can be a lot better in possession. I thought we gave up possession too easily at times at the Stade de Luxembourg. And we were unable to build attacks as we would have liked.”

With Jonny Evans heading back to his club, after a run-out in Luxembourg aided his return from injury, Millwall defender Daniel Ballard is expected to be among a handful of changes to the starting line-up tonight.

In the programme Baraclough also insisted his team face a tough assignment against the Hungarians.

“No disrespect to Luxembourg, but Hungary are a different level. They are a team who are very much on the up. Going in to League A in the Nations League is credit to them and the work that they have done to improve,” he pointed out.

“I have no doubt that we will have to be at our very best to get something out of the game because the Hungarians are strong in all areas.

“I think they are very, very good as a team. They don’t really have stand-out individuals. Instead, it is all about the team working together and they work hard for each other across all areas of the pitch.”

Steven Davis is set to captain Northern Ireland tonight following his appearance as a second half substitute in Luxembourg which yielded his 13th international goal and his 133rd cap for his country.

The skipper told a press conference yesterday that he is keen to get game time against Hungary as he eases his way back into action after a spell on the sidelines.

Conor Hazard and Luke Southwood shared goalkeeping duties in Luxembourg, however regular number one Bailey Peacock-Farrell is in line to start tonight after being unavailable for the game on Friday.

Like Northern Ireland, Hungary missed out on qualification for this winter’s FIFA World Cup, finishing fourth in UEFA Qualifying Group I. However, they ended the campaign just three points behind group runners-up Poland, whom they beat 2-1 in Warsaw in their final qualifying match.

They also did rather well at the delayed UEFA Euro 2020 last summer. Placed in Group F with France, Germany and Portugal, they were unlucky not to progress out of the so-called ‘Group of Death’. Although they lost 3-0 to the Portuguese, they drew with France and Germany, pushing both of them right to the wire.

Dominik Szoboszlai, who missed UEFA Euro 2020 through injury, is Hungary’s main creator. He is often given a free role in midfield to help link the team’s attacking moves.

Captain Ádám Szalai is excellent at holding up the ball and bringing willing runners, such as striker Roland Sallai, into the game. He also has a decent international scoring record with 25 strikes in 79 appearances for Hungary to date.