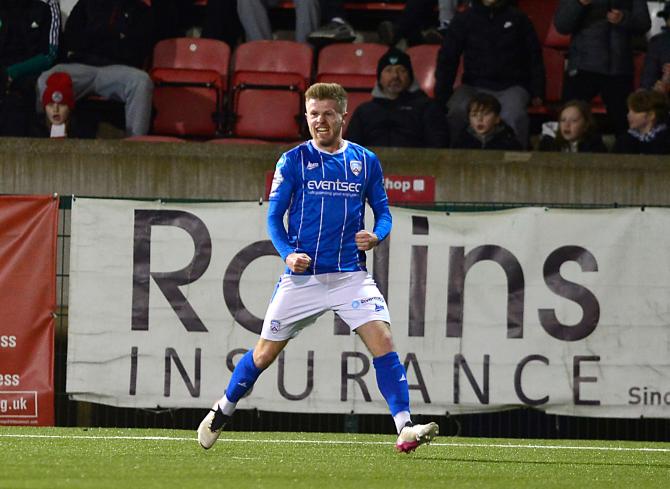 Coleraine defender Lyndon Kane says winning a third trophy in four years would be a fitting reward for the hard work put in by everyone at the club. Pic: Stephen Hamilton/Inpho.

DEFENDER Lyndon Kane admits league form goes out the window when it comes to big games.

Which is just as well as Coleraine have endured some tough times in the Danske Bank Premiership this season, not least in their failure to get the better of Sunday’s opponents Cliftonville.

A scoreless draw at the Showgrounds is the best Coleraine have done against the high-flying Reds who go into this weekend's Bet McLean League Cup final chasing a possible treble of trophies.

As well as Sunday, the north Belfast club are in the last four of the Irish Cup and remain resolutely on the coat-tails of Belfast’s ‘Big Two,’ Linfield and Glentoran, in the race for the Gibson Cup.

Coleraine, in contrast, bowed out of the Irish Cup, at the hands of this weekend’s opponents, and must look to the end of season play-offs in their bid to secure European football this summer.

It’s been a disappointing campaign in many ways but all will be forgotten come 5pm or thereabouts on Sunday should Oran Kearney’s men conjure up one big performance.

Regular right-back Kane believes they can.

“Our league form hasn't been great this year, it's been well documented, but the cups have probably come at a good time in the season, came in between bad spells and we've done well in them,” he says.

“So for us, to win the first trophy available would be unreal and for it to happen in March it could be the best thing to happen to us.

“It's crazy the momentum that could come with that and you just never know where it would take you.

“The belief's always there, it's there going into league games against Cliftonville, Glentoran, Linfield.

Whoever we play you always believe you're gonna win because if you don't I feel there's no point in playing.

“For us as well, we've got a lot of winners in our changing room – there's probably about 13/14 players left from the Irish Cup success in 2018.

“Then you've got Stevie Lowry coming in to that as well, who won leagues and Irish Cups with Linfield, so there’s a wealth of experience there.

“Cup games are one-off games, form goes completely out the window and it's like a derby game.

“In cup football anything can happen, you just never know what it can throw up.

“It's a level playing field, though we probably do go in as slight underdogs because of the way they've played this season, but it's a challenge we welcome,” he adds.

As for Sunday’s opponents, while Kane acknowledges they’re a good side and pays tribute to the work of manager Paddy McLaughlin, he hopes the experience of lifting trophies will stand to the north coast men.

“As a group, they maybe won the County Antrim Shield a couple of years ago but they haven't won a major trophy domestically which we have so hopefully we can use that to our advantage,” he continued.

“Yes, they have done well to get to the final of this competition but in cup competitions anything can happen on any given day so you just never know.

“Big crowds, big occasions, big moments, big players which we have loads of as well as they do.

“Hopefully we have someone that can become a hero and we go home with the cup.”

Someone like Matthew Shevlin, for example, Coleraine’s leading goalscorer who is looking to avoid an unwanted hat-trick on Sunday.

Twice a finalist at Ballymena Utd, ‘Shevy’ ended up on the losing side on both occasions - against Dungannon Swifts and Linfield - and is determined that it'll be third time lucky this weekend.

“My first final was against Dungannon and we were heavy favourites going into it,” recalls the Ballymena man.

“For them to beat us on the day was very tough.

“The season after that we played Linfield. We played really well in that game and maybe should have won, but we lost 1-0.

“So, hopefully, it’ll be third time lucky this weekend!”

And, just like his colleague Kane, Shevlin also believes everything is up for grabs.

“Cliftonville have been brilliant all season but league form goes out the window when it comes to these sort of games, any cup competition really, and especially a final,” he continues.

“We'll go into the game full of confidence that we can get the win.

“We’ll just focus on ourselves and what our strengths are and see what happens.

“We know we can beat anybody on our day if we play to our strengths, so that's what we'll be doing.

“We've a helluva lot to play for, other than the League Cup final, so that's maybe a good distraction from it but we'll be ready to go.

Despite the claims, all the evidence points to a difficult afternoon for Oran Kearney’s men.

They have yet to record a victory over Cliftonville in either the league or Irish Cup and confidence is bound to be sky high among the Reds.

In Jamie McDonagh they have one of the league’s most in-form players and they boast an impressive array of attacking talent, headed up by the irrepressible Joe Gormley.

They have a hard-working and efficient midfield and a much improved defence with Johnny Addis and Kris Lowe two great additions. Goalkeeper Luke McNicholas isn’t bad either.

But, football being what it is, we all know that anything can happen over 90 plus minutes and that is what we as supporters must cling on to.

We must believe that Coleraine have that one big performance in them to hold on to a trophy they so memorably won back in 2020. They, too, boast talent and experience in their ranks.

From goalkeeper Gareth Deane, master of the clean sheet, through to a mean defence, superbly marshalled by club captain Stephen O'Donnell, they are well served at the back.

In midfield, veteran Stephen Lowry continues to roll back the years with dominant displays, aided and abetted by Josh Carson whose energy is a vital component of Oran Kearney's team.

Then you have the likes of the mercurial Jamie Glackin, the effervescent Conor McKendry and the goalscoring prowess of Matthew Shevlin to cause Cliftonville problems.

Throw in the experience of 'Skinner' Bradley, James McLaughlin and Curtis Allen and the youthful vigour of teenager Patrick Kelly and it's a pretty potent mix Oran Kearney has at his disposal.

It won't be easy but Coleraine have shown in the past that they can produce when it matters.

It's time to put the inconsistent performances to bed and remind everyone what a good side they can be.

And bring the cup back to the Showgrounds...