'Fans have a part to play' 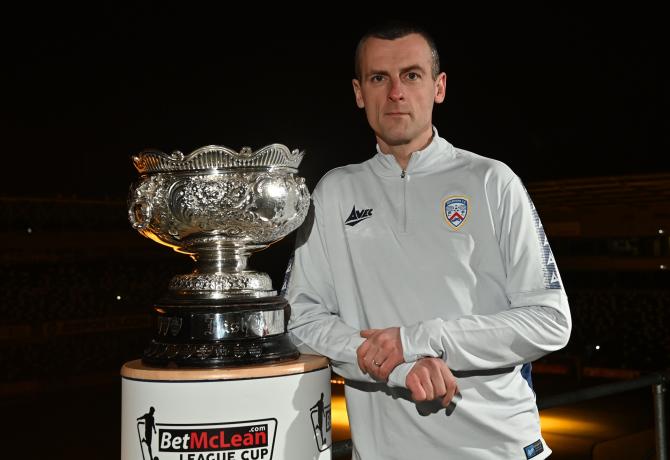 COLERAINE manager Oran Kearney claims the club's supporters have a huge part to play as they look to defend the League Cup they won with victory over Crusaders the last time the final was played in 2020.

Back then, the Crues started brightly and took the lead through Jamie McGonigle.

However, inspired by the 'Blue and White Army' in the East Stand, the Showgrounds side rallied and goals from Stephen Lowry and James McLaughlin completed a famous comeback.

Speaking ahead of Sunday's eagerly anticipated final, the Ballymoney schoolteacher said there was plenty to learn from events of three years ago.

"Fans have a huge part to play," he said.

"I remember the last League Cup final – we didn't start particularly well and we conceded early.

"To be fair, our fans were huge in number but also huge in voice and particularly in a stadium like Windsor that's vitally important.

"The Irish Cup final in 2018 was exactly the same

"We talk about it being the 12th man every week but on days like this it's magnified ten-fold," he added.

At the time of writing on Friday morning Coleraine had sold 3,500 tickets with opponents Cliftonville believed to have sold more for a first in Irish League circles - a major final being played on a Sunday.

The decision has led to some supporters stating they won't attend but others argue that it is an enlightened move by the NI Football League.

Whatever the merits of the decision it seems there will be a crowd in the region of 10,000 at the National Stadium on Sunday afternoon.

"Big credit to the league for a Sunday final," was Oran's thoughts when asked.

"On our side there's maybe been a few grumbles from fans, ones who aren't maybe as entertained by it, but I'm a big advocate of you don't just keep doing the same things because you've always done it.

"It could be something down the line. For instance, down south they have games on a Friday, Sunday and sometimes a Monday and down the line that's maybe our league can have some Friday night games, 5.30pm Saturday, might there be teams to stretch to a Sunday fixture.

"You look at the crowds the GAA gets on a Sunday while plenty of people are happy to go and watch Premier League football and Scottish football on a Sunday. I just don't know how the Irish League is any different.

"We have to be open minded. So many people play football on a Saturday – would they come and watch a Coleraine match on a Sunday? For the parts of the crowd that you would lose, might you gain elsewhere?"

The debate is sure to continue after this weekend but, for now, Oran, like his counterpart Paddy McLaughlin, is simply focused on lifting the first trophy of the season.

"Any piece of silverware is great and particularly the way the landscape of our league has changed over the last couple of years getting to cup finals is even tougher," admitted Oran.

"It's a massive credit to two part-time teams to have made it to this stage but these opportunities don't come around too often.

"We waited a long time to get to our first cup final. We've had a few cup finals since then but you don't know when the next one will come round either so it's so important that you take these opportunities when they're there.

"Another cup final win would be just reward for this group of players. You've got the stalwarts – Lyndon, Josh, Stephen Lowry, Stephen O'Donnell – big part of that and are ultra deserving

"I appreciate that you don't always get what you deserve in football but they – along with the new ones who have come in and carried that can – have been brilliant as well and a win on Sunday would be fitting reward for them."

It's the experience and know-how of players name checked by their manager which will be needed in abundance on Sunday if Coleraine are to keep a hold of the famous old trophy.

They have been there and down it over the past five years or so, building up a reservoir of knowledge of what is required on the big occasion.

By contrast, few of the current Cliftonville team have a similar depth of experience.

The hope is that Coleraine's greater game management will get them over the line in what promises to be an intriguing clash.

* Report and reaction in Tuesday's Chronicle.