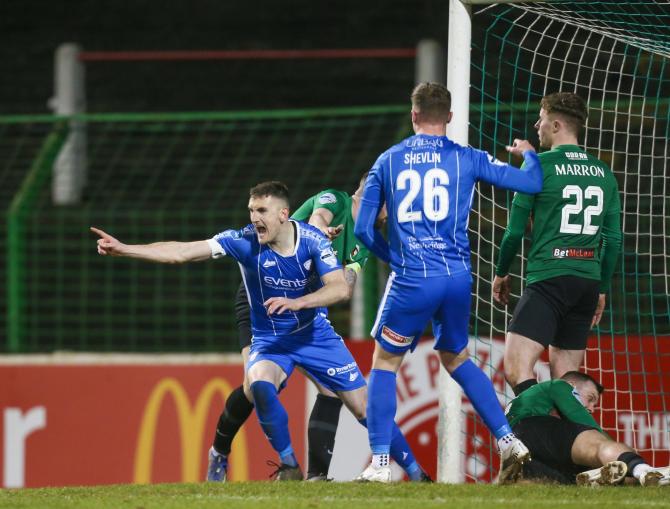 COLERAINE went down to a seventh league defeat of the season and a first at the Oval in almost six years when a late Conor McMenamin winner secured all three points for Glentoran on Tuesday night.

McMenamin pounced in the 90th minute, reacting quickly to fire home after Coleraine failed to deal with a free-kick into their box, to break the visitors' brave resistance.

They had earlier clawed their way back into the game with a first goal of the season from skipper Stephen O'Donnell after Michael O'Connor had given the home a first half lead with his first goal for the club.

It was cruel on the visitors who contained their illustrious opponents for much of the game before putting the pressure on their hosts in the second half.

But a momentary lapse in defence allowed the alert McMenamin in for his second goal in as many games to ensure the Glens closed the gap on league leaders Linfield who could only draw 2-2 away at Cliftonville.

Oran Kearney made just one change to the team which started in the weekend win over Carrick Rangers, Conor McKendry replacing Curtis Allen, who later came off the bench to make his 500th league appearance across a number of clubs.

Neither side created much in the opening exchanges but that was to change just before the half hour mark when O'Connor got on the end of a Robbie McDaid cross to break the deadlock.

The second-half started with the Glens on the front foot as Deane had to be alert to keep out McDaid’s daisy cutter, before Stephen O’Donnell was in the right place at the right time to clear away O’Connor’s effort off the line.

Oran Kearney shuffled his pack on the hour mark by bringing on Matthew Shevlin and Curtis Allen, with the Bannsiders enjoying more possession and territory. That would be rewarded on 73 minutes as Coleraine drew level as Stephen O’Donnell headed home his first goal of the season from Conor McKendry’s corner kick.

The game started to flow end to end and Glentoran would threaten would just five minutes to go as Seanan Clucas fired over from the edge of the area.

However, there would be late drama to the game as Glentoran found a winner on 90 minutes as a free-kick into the area wasn’t cleared and Conor McMenamin bundled the ball home.