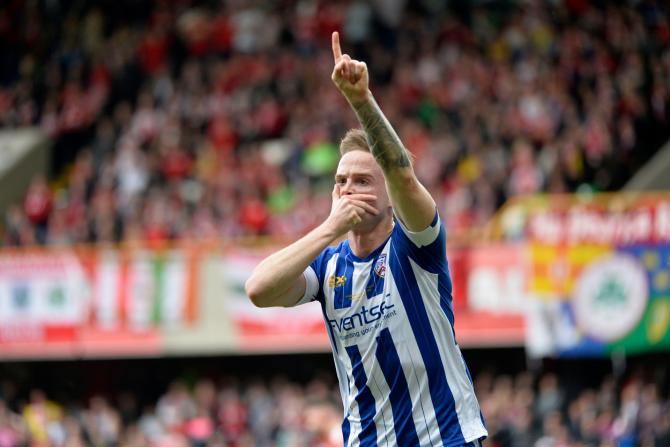 FORMER Irish Cup final winning goalscorer Aaron Burns believes Oran Kearney will have his players prepared for the challenge of facing Windmill Stars in the first round of the Samuel Gelston's Irish Whiskey Irish Cup this weekend.

Burns, who famously scored the decisive second goal in a 3-1 win over Cliftonville the last time the Bannsiders lifted the trophy back in 2018, says games like Saturday come down to one thing - attitude.

"It should be a formality for Coleraine to go through," the Banbridge man told the official Coleraine FC podcast this week.

"I've played in ties like this before - we played Killyleagh and others for example - and they can be tricky games because the expectation is there and the squad is rotated with younger players given a chance along with fringe players. It can become a testing afternoon if attitudes aren't right.

"Oran's team talk will be all about attitude, it'll have nothing to do with ability on Saturday.

"Whatever team Coleraine field will be far superior technically so it'll all come down to attitude.

"I don't Oran or Winkie or Trevor will allow for attitudes to slip - it's just the professionalism they bring - and I don't think that will be an issue," he added.

"I've great memories of that cup final win with Coleraine and particularly the goal which will live long in the memory.

"It's one of the best goals I ever scored because of where it was, the timing of it and everything else and it's lovely to look back on," he added.

Coleraine haven't played competitively since the 2-0 derby day defeat at Ballymena Utd, the New Year's Day game at home to Warrenpoint Town falling victim to Covid, and are in a poor run of form in the Danske Bank Premiership.

Saturday offers an opportunity of returning to winning ways in a tournament which offers a gateway to European competition and the financial windfall that it brings.

Oran Kearney is expected to field a strong side for the visit of the Newry club but he may be tempted to give game time to players who have featured little to date this season.

The match may also see the return to the first team squad of striker Curtis Allen who has missed the first half of the campaign through injury.

As for Coleraine's opponents, the Mid-Ulster League side travel north with nothing to lose in the biggest game in the club's history.

They have already won four games on their way to the last 32 and are backboned by a number of players with top-flight experience, including the former Newry City duo of Timmy Grant and John Joe Maguire.

He told Belfast Live that he and his colleagues were looking forward to their visit to the Showgrounds.

“People talk about Linfield or Glentoran, but Coleraine are in there with those top teams so we have got one of the big guys. These are the clubs used to winning the Irish Cup," he said.

“It will be a new experience for a lot of our guys. Playing in a big ground with a big crowd, all things we should look forward to.

“We are going there and are under no illusions. We will give it a rattle and try to give a good account of ourselves," he added.