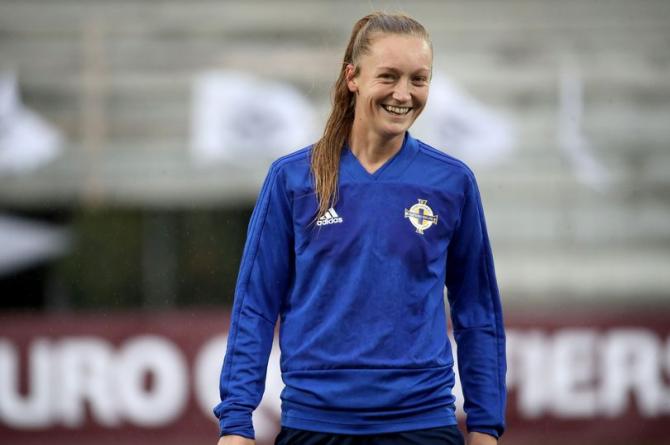 Kenny Shiels’ side were simply superb as they claimed another three points in European Qualifying Group D with an 11-0 victory in Skopje this afternoon.

It was the Northern Ireland senior women’s team’s biggest ever away victory – and Furness’s hat-trick meant she equalled David Healy’s goalscoring record for Northern Ireland. The midfielder now has 36 goals for her country.

Shiels’ team completely dominated proceedings at the Football Federation of North Macedonia Training Centre. They were 7-0 up by half-time.

The early action saw a decent delivery from Demi Vance headed clear. Her next cross, however, was more effective. Her pinpoint delivery to the back post found Furness and she tucked the ball home from close range to make it 1-0 in the fourth minute.

Another cross from Vance across the face of goal was met by McKenna whose low shot was blocked by the home defence.

On 10 minutes Wade broke down the right and fed the ball back to McKenna who blasted it into the top corner. It was a lovely finish to put Northern Ireland two up.

At this stage it was all Northern Ireland, and the third goal followed a minute later. This time Furness fed Magill inside the area and she slammed the ball into the bottom corner.

In the 16th minute Furness was hauled down inside the area by North Macedonia midfielder Elma Shemsovikj and she brushed herself down to slot the resulting penalty past keeper Magdalena Lekovska to make it 4-0.

Skipper Marissa Callaghan fired an effort against the bar before Northern Ireland were awarded another penalty when Viktorija Nedeva fouled McGuinness inside the area on 23 minutes. This time, however, Lekovska was equal to a tame effort from Furness.

Furness then fired a shot wide, but Northern Ireland’s fifth came soon after when a Holloway cross eventually found its way to Wade who curled a beautiful effort into the top corner from 16 yards.

That goal came in the 26th minute and goal number six followed seven minutes later. Holloway slipped in McGuinness down the left and from an angle she slotted the ball into the bottom corner.

Magill grabbed her second of the game on 42 minutes. Holloway was once again the provider. She slipped past a couple of markers and crossed for the striker to cleverly tap the ball home from close range.

Rachel McLaren made her senior debut after replacing Crusaders Strikers team-mate Julie Nelson at half-time, while Chloe McCarron came on for Callaghan.

North Macedonia, who were without a few key players, never got going, although Northern Ireland rarely let them out of their half as they pushed forward time after time.

Early in the second half Wade let fly from the edge of the area and was unlucky to see her effort cannon off the bar, and a minute later Furness saw her long range effort tipped on to the bar by Lekovska.

McKenna dragged a shot wide, a Vance cross dropped on to the top of the net and Lekovska pushed away a Furness header as the girls in green and white continued to apply pressure.

Furness completed her hat-trick in the 68th minute. A McGuinness cross bobbled around the box and eventually the ball fell to the midfielder 10 yards out and she rifled it home.

Holloway produced a lovely piece of skill down the left and fired in a cross which Magill headed wide of the post.

Magill got her hat-trick moments later, however, when the goalkeeper’s kick-out went straight to the striker and she swept the ball past her.

Substitute Kelsie Burrows scooped a shot wide before another Northern Ireland sub, Caragh Hamilton, pulled the ball back to Wade but she fired over the top.

Then another sub, Nadene Caldwell, let fly inside the area only to see her rasping effort palmed away by the North Macedonia keeper.

Magill made it 10-0 as full-time approached. Northern Ireland keeper Jackie Burns punted the ball forward and it evaded the home defence, however Magill nipped in behind them and cleverly lobbed the keeper.

Holloway got the goal that her overall performance deserved when she netted number 11 in added time, tucking the ball in from six yards out to complete the memorable rout.

Now Shiels’ side will turn their attention to the second FIFA Women’s World Cup 2023 qualifier against North Macedonia at Seaview on Monday. And that will be a game they will be expected to win.