Ballymoney, Limavady and Portstewart all safely through in Intermediate Cup 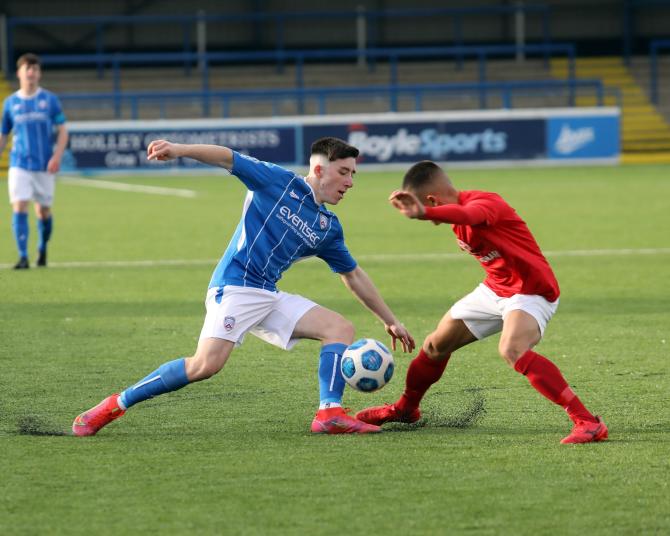 Coleraine Under-20s lost out to Larne in the second round of the McComb’s Coach Travel Intermediate Cup.

THERE was a mixed bag of results for all the local sides competing in the second round of the McComb’s Coach Travel Intermediate Cup.
The competition returned at the weekend with Limavady United, Ballymoney and Portstewart ensuring their name would be in the hat for the third round.
However, there was disappointment for Coleraine Reserves and Dungiven who were both beaten 3-1.
Bangor and Armagh City – who currently occupy the top two positions in the Premier Intermediate table – will also be represented in the third round draw.

Coleraine Reserves hosted Larne Olympic at The Showgrounds hoping to emulate the result of the first-team the night previous.
However, Coleraine fell behind from a deflected effort early on before Larne doubled their lead early in the second half from the penalty spot.
Coleraine regrouped and got back in game when good work from Jay Riley set up Kirk McLaughlin who finished well. The Bannsiders pushed on in search of the equaliser but couldn't force the goal.
Larne made the game safe in the final minute to leave the final score 3-1 to the visitors.
Elsewhere, Dungiven travelled to face Ards Rangers and were level at the break. However, the hosts would edge ahead through Newberry’s penalty and a strike from Doran sealed the matters.
At the Riada Stadium, Ballymoney United began the game creating a few chances but were made to work as they away team created a few good chances of their own. However, a threatening delivery from Gareth McLaughlin saw the Hanover defender turn the ball into his own goal.
Ballymoney pushed for a second before half-time however the away team’s goalkeeper made sure it stayed 1-0 at the interval – including stopping a penalty.
Hanover came out quicker in the second-half and earned a penalty of their own only for Liam Coyle to get down low and pull off a second penalty save in the game. To their credit, both teams fought for another goal but the scoreline remained the same to see the Toon in the hat for the next round.
In a battle between third and fourth in the Premier Intermediate table, Limavady United would have home advantage for the visit of Banbridge Town.
The major talking point in the first-half would see the hosts miss a spot kick through Alex Pomeroy but they would take the lead after the interval through Caiolan Brennan. Just when it looked like the Roesiders had done enough to win, they had to endure a sucker punch at the death as Chris McMahon netted to send the game into extra-time.
The match winner would arrive in the second period of extra-time as Dean Brown fired home to send the 2016/17 winners into the next round.
“It was a very tough draw and the only all PIL clash, so we are delighted to progress to the next round,” said boss Andy Law.
“We would have liked to get through the game in 90 minutes and to concede in injury time of the second half was hard.
“The boys responded very well in extra-time, got the winner and we were able to see out the game.”
Portstewart would make the long journey to Killyleagh YC and would take the lead in eye catching circumstances as a long kick forward by goalkeeper Andy Findlay sailed into the net to make the breakthrough.
The Seahawks would add further strikes through Joel Bradley (2) and Mark Edgar ahead of the fourth round of the Irish Cup this weekend.
“People don’t realise how important the cup competitions are,” said boss Johnny Law.
“We’ve had three cup fixtures in a row and we wanted to win them all.
“We have done that and we won all the games pretty well.
“We have scored plenty of goals, conceded very little and that’s a good platform to build on.
“The pitch probably didn’t suit us as much as we thought, but as the game went on we got stronger and the fitness showed in the end.”