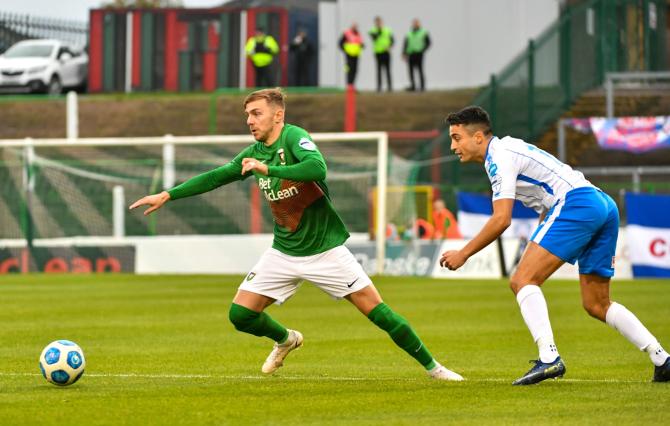 COLERAINE defender Aaron Traynor has paid tribute to supporters for helping drive the players on to rescue a point in Saturday's 2-2 draw with Glentoran.

And he has called on them to again get behind the players as they face a completely different challenge at home to Warrenpoint Town this weekend.

The visitors are enduring a miserable start to the Danske Bank Premiership season and will be expected to leave with nothing from their trip to the Showgrounds.

However Traynor, who played for the border club before making the switch to Coleraine, is experienced enough to know that things don't always work out as planned.

“All the teams are hard to break down," explained the Belfast man.

“They will come up here with a game plan, like we will have ours.

“I hope we can get the first goal and defend a bit better when we are in front.

“I think it’s important we are clinical up top as well," he added.

Certainly, it might be expected that Barry Gray's men might set up not to lose as opposed to going all out to try and win the game.

They have just one win from their opening eight games, losing the other seven, and have conceded 21 goals in the process, the second worst defensive record in the league behind Dungannon Swifts.

Oran Kearney's men's defensive record is up there with the best but it's going forward that they have really impressed.

They are the league's leading scorers with 19 goals scored in their nine games, averaging more than two goals a game.

But they will need to patient against what is expected to be a dogged Warrenpoint side which is where the supporters come in.

A large and noisy travelling support played their part in helping the players claim a point at the Oval and they can do so again according to the left-back.

“Please keep turning out," he said, in reference to the fans.

“You could see when we did go 2-1 down against Glentoran, we sort of needed someone to galvanise us and you could hear them getting noisier by the minute.

“They loved that equaliser by the looks of it and you could hear the atmosphere picking up.

“We love them - they are our 12th man - and we are looking forward Saturday when hopefully they come out in their numbers."

Which they should do: Coleraine's two homes to date against Ballymena Utd and Glenavon have been well attended and with 1,000 season tickets sold for the first time in the club's history the expectation is that the Railway End will again be bouncing come Saturday afternoon.