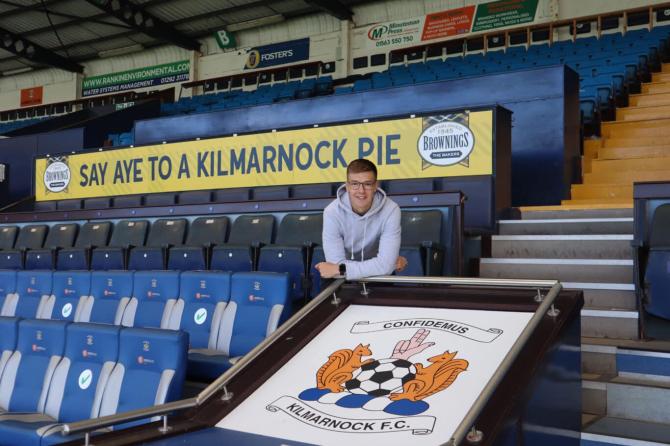 FORMER Coleraine midfielder Brad Lyons will ply his trade in the Scottish Championship next season after signing a two year deal with Kilmarnock.

Lyons, who recently spent time at home after helping Morecambe win promotion from League Two in England, will link up with former NI international Tommy Wright at Killie.

Wright, a one-time manager of Ballymena Utd in the Irish League, is currently rebuilding his squad at Rugy Park following relegation from the Scottish Premiership at the end of last season.

“It feels brilliant to be a Kilmarnock player and I’m so thankful to the manager for bringing me to such a big club. He’s really well known and respected in Northern Ireland and it was a no brainer to come and play under him," Lyons told the Kilmarnock website.

“I had a great run with Morecambe and to experience Wembley. It was a great experience and one I’ll never forget and hopefully we can experience promotion here too.

“I’m an all-round midfielder. I don’t mind doing the defensive duties and then trying to get forward as much as possible. Hopefully I can help the team and add more goals to my game," he added.

It's Lyons's second spell playing in Scotland following a loan move to St. Mirren in 2019 during Oran Kearney's spell as manager and former international goalkeeper is confident he is getting a promising young talent.

“He’s a strong player with plenty of energy and he’s another who is a good age. He had options but this was where he wanted to be so I’m glad to get Brad in," the Ballyclare man said.

“He’s a box-to-box midfielder and I do feel that one area that we can help him with is to get him back to what he did in the Irish League, which was score goals.

“He had a good scoring record with Coleraine, had a decent loan at St Mirren and did well at Morecambe last year.”