Bannsiders remain in the hunt after derby win 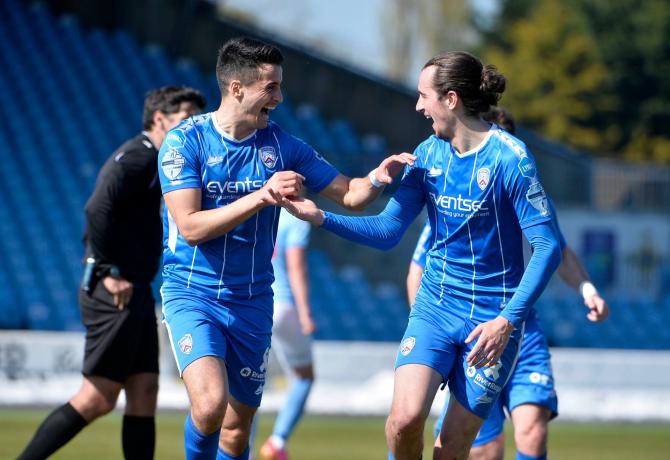 GLENTORAN asked the question, and Coleraine answered it.

Less than 24 hours after the Glens had stretched their advantage over the Bannsiders with victory over Larne, Oran Kearney's charges got the better of Ballymena Utd to close to within a point of the east Belfast club.

It was a statement of intent from Coleraine against their derby rivals who, on their day, are capable of defeating the league's best.

But not on this occasion.

The visitors deployed all their experience to establish a 2-0 lead early in the second half and then hold firm against the best of what the home side had to offer in a frantic last quarter.

Aaron Traynor, nominally a left-back but playing here more like a flying winger, opened the scoring shortly before the break.

Receiving the ball from Eoin Bradley on the wing, the defender made a beeline for the Ballymena penalty area where he swapped passes with Stephen Lowry.

Traynor continued his run into the box where he shot towards goal.

His initial effort was well blocked by a defender but the Belfast man maintained his composure to recalibrate and fire a left foot shot past Ballymena keeper Jordan Williamson from 12 yards.

It was the perfect ending to a well contested opening 45 minutes and things got even better shortly after the restart.

Again, Bradley was involved, holding off the attentions of Jim Ervin long enough to allow Stephen Lowry to advance on the overlap inside the United box.

The midfielder still had plenty to do but he kept a cool head to slot the ball past the United keeper from a tight angle to double his side's advantage.

The visitors were well worth their 2-0 lead at this stage but left themselves open to a nervy finish when Ross Redman pulled one back for their home side.

Ballymena threw everything at their opponents in the closing stages but Coleraine defended superbly to hold onto to their valuable lead.

It was no more than they deserved on an afternoon when they played the better football and created the better openings.

Now, attention turns to Tuesday night and the visit of Crusaders in the Sadlers Peaky Blinders Irish Cup.

* For more on this game and a full preview of the Irish Cup - plus details of Coleraine's final five post-split fixtures - pick up a copy of Tuesday's Chronicle.