Bannsiders back to winning ways

Coleraine maintain pressure on Linfield with impressive victory over Larne 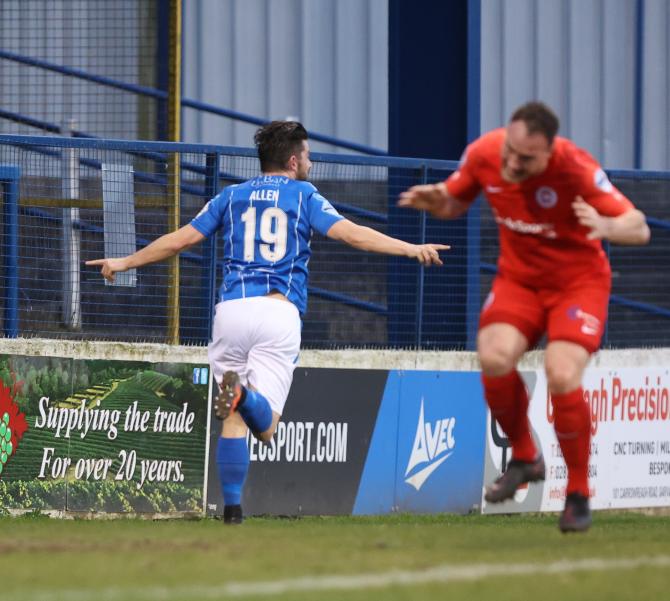 Curtis Allen opened the scoring for Coleraine in Tuesday night's 2-0 win over Larne.

COLERAINE put behind them the disappointment of defeat at Cliftonville on Saturday by running out deserving 2-0 winners over Larne at the Showgrounds on Tuesday night.

A goal in either half from strikers Curtis Allen and James McLaughlin was enough to secure all three points against Tiernan Lynch's side.

It was no more than the home side deserved after a performance of determination and quality in which every player played their part.

The result means that Coleraine close to within seven points of Linfield but, crucially, with a game in hand.

Both sides created chances in the opening 45 minutes but it was Coleraine who took theirs, Curtis Allen timing his run to perfection to get on the end of Ronan Wilson's floated cross.

The former Glentoran man got in front of Albert Watson before planting his header low into the corner of the net past the helpless Conor Devlin.

Ronan Hale came close to levelling for the visitors in that first half but his deft volley cannonned off a post and away to safety.

James McLaughlin replaced the injured Ben Doherty during the interval for the home side and he wasted no time in announcing his arrival.

Barely 30 seconds after entering the fray, he showed all his customary coolness in front of goal to guide the ball past Devlin to double his side's advantage.

The goal had a two-pronged effect: it gave Coleraine something to really hold on to while at the same time appearing to dent Larne's confidence.

Oran Kearney's men were heroic in that second period winning duels all over the pitch.

At the back, skipper Stephen O'Donnell and Aaron Canning were inpenetrable, majestic in the air and composed with the ball at their feet.

Behind them, goalkeeper was assured in everything he did while the returning Aaron Traynor and Ronan Wilson were faultless.

Their performances were even more impressive given that neither had expected to play. Indeed, so impressive was Wilson, deputising for regular right-back Lyndon Kane, that he finished the night by walking off with the man of the match award.

There were more tremendous individual performances in the middle of the field: Ian Parkhill worked his socks off, Josh Carson revelled in a central midfield role in the latter stages of the game, Ben Doherty crashed a shot off the crossbar before going injured while Stephen Lowry was, well, Stephen Lowry.

The Limavady man continues to defy expectation as he gets better with age: by the end, Larne's players had to resort to foul means to try and negate his influence on the game, several guilty of crude challenges on the midfield general.

Jamie Glackin caused concern all night, providing the crucial ball for James McLaughlin to score, while Curtis Allen showed the predatory instincts of a striker to break the deadlock in a tense opening period.

James McLaughlin netted the crucial second goal moments after coming on for the second half while fellow sub' Matthew Shevlin put himself about to good effect during the time he was on the field. Evan Tweed entered the fray late on to help seal the result.

Every man played their part in an important win.

Important for the three points as they keep Linfield honest at the summit of the Danske Bank Premiership but, equally, important as a statement to say they are going nowhere.

One or two questions may have been asked in the wake of Saturday's loss at Cliftonville but they were firmly answered on Tuesday night.