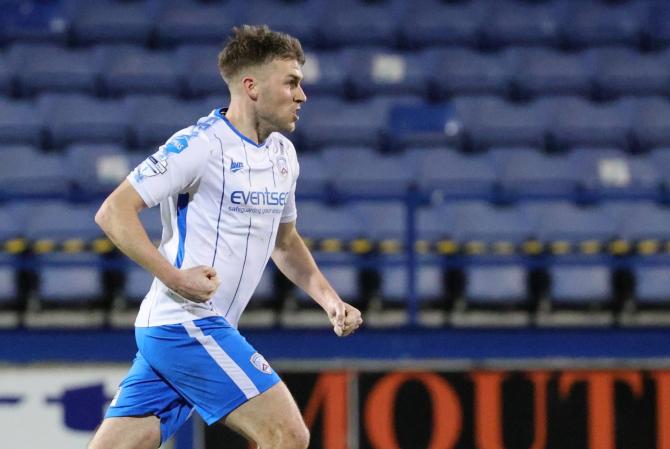 Stephen Lowry celebrates his goal against Glenavon on Tuesday night.

TWO points dropped. Or one gained.

It's difficult to know following Coleraine's 1-1 draw with Glenavon at Mourneview Park on Tuesday night.

Perhaps it will become clearer later in the campaign just how vital a share of the spoils was against Gary Hamilton's side.

Both teams will believe they should have won the game, Glenavon for their dominance of the opening 45 minutes and the Bannsiders for the way in which they finished the game.

The hosts began brightly against a Coleraine side which showed a number of changes from the weekend win over Carrick Rangers.

Strikers James McLaughlin and Stewart Nixon were relegated to the bench for this one where they were joined by the midfield pair of Evan Tweed and Ian Parkhill.

Replacing them were Curtis Allen and Matthew Shevlin up front with Aaron Jarvis and Jamie Glackin also restored to the starting line-up.

Glenavon, meanwhile, made three changes to the team which had lost to Glentoran at the weekend and it was clear from the outset that they were determined to banish memories of that defeat to the Glens.

Matthew Shevlin had a great chance to open the scoring for Coleraine early in the game after being put through by Curtis Allen but he volleyed wide from the edge of the box.

Peter Campbell was a constant thorn in the Coleraine defence at the other end and he went close midway through the opening half, his effort going the wrong side of the crossbar.

Josh Carson forced a smart save with his foot out of Glenavon keeper Craig Hyland while Jamie Glackin was in the right place at the right time to head off his own goal line just before half-time.

The deadlock was broken early in the second half when former Bannsider Matthew Fitzpatrick ghosted in to blast home from close range after the visitors' defence failed to deal with a Conor McCloskey cross.

Jamie Glackin passed up a great opportunity to level when he inexplicably missed a header from a matter of yards out following good work by Curtis Allen as Coleraine pressed for an equaliser.

And their efforts were rewarded when Stephen Lowry volleyed home, with the aid of a deflection, 15 minutes from full-time.

That was the cue for Coleraine, with Bradley, McLaughlin and Parkhill all sprung from the bench, to lay siege to their opponents' goal in the closing stages.

McLaughlin and Parkhill both went close but failed to find the target as Coleraine had to settle for a share of the points.

Elsewhere on Tuesday, leaders Linfield went down to a 2-1 defeat at Ballymena Utd while Crusaders also lost, 2-1 at Dungannon, Dean Shiels gaining his first win as Swifts' boss.

Glentoran maintained their recent good form with a 2-1 win at Warrenpoint Town while in the remaining game Carrick Rangers came from behind to defeat Portadown 5-3 in an eight goal thriller.