Coleraine to do the double over Carrick 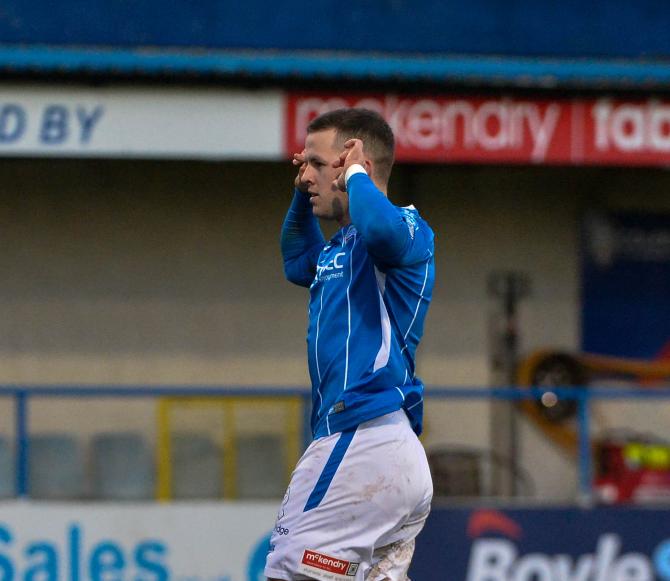 Ben Doherty opened the scoring for Coleraine in the 3-0 home win over Carrick Rangers at the start of January.

COLERAINE will look to get back to winning ways this evening - weather permitting.

Following Saturday's scoreless draw away at Linfield, Oran Kearney's men are on their travels again, this time to the Belfast Loughshore Arena and a meeting with Carrick Rangers.

The two teams met at the Showgrounds back at the beginning of the year when the home side ran out 3-0 winners.

However, the scoreline perhaps doesn't reflect the closeness of the game, with all three of Coleraine's goals that day coming in the second half.

Ben Doherty, currently out injured, opened the scoring from the penalty spot in the 54th minute and it wasn't until four minutes from full-time that Stewart Nixon double the lead against his former team. The points were finally secured with an Eoin Bradley in added time.

“That’s a third win in a row and a clean sheet to boot and that was the only aim we had coming in today,” reflected Oran after that win.

“It's been well documented that we've gone through a rough enough spell at the end of November and start of December so our sole aim today was to try and get a third win. We're delighted to do that and to get a clean sheet is even better.

“Any time we play Carrick we know exactly what we're gonna get. Niall has them well organised and, to be fair, in the first half they caused us problems at times,” he added.

This evening promises to be no different, Carrick enjoying a fine run of form recently, only halted slightly by the 4-3 defeat by Glenavon at the weekend.

However, the loss came at an extra cost for Carrick with on loan striker Cathair Friel limping out of the action with injury.

There are also injury concerns over fellow strikers Alex Gawne, on loan from Coleraine, and Jonny Frazer who netted twice in the recent 3-1 win at Crusaders.

Coleraine, too, are without a number of players, including midfielder Ben Doherty and striker James McLaughlin, though they were able to welcome back forward Matthew Shevlin for the weekend trip to the National Stadium.

They go into tonight's game knowing that three points will keep them firmly in the mix at the top of the Danske Bank Premiership. Indeed, a win would see them leapfrog Crusaders into third place.

The Crues, inactive this evening, are currently on 33 points from their 19 games played, Coleraine on 31 points having played 18 games.

Like most weeks now, it appears, there are big games taking place everywhere you look this evening and none bigger than the meeting of Linfield and Glentoran at Windsor Park.

Second-placed Larne are also in action, away to Portadown, Cliftonville and Ballymena Utd meet at Solitude with Dungannon Swifts and Glenavon completing the line-up.

A win for Coleraine, coupled with less positive results for either Linfield or Larne - or both! - and things could get very interesting indeed...