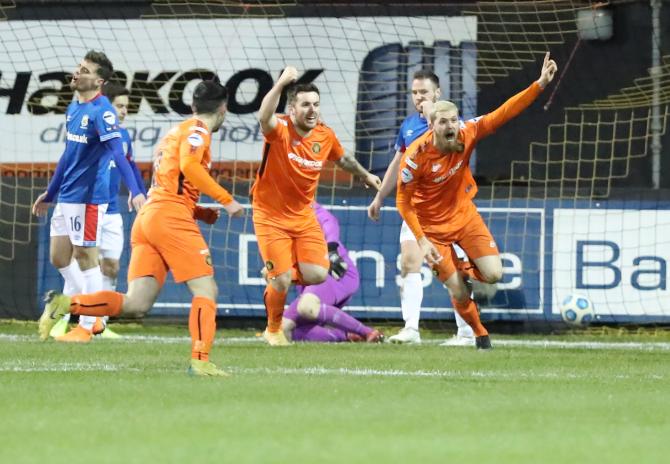 COLERAINE were the big winners on Tuesday night - despite not kicking a ball!

The Bannsiders' game at Glenavon was one of three top flight games to be called off because of the arctic weather.

Of the three games that were played, there were shocks in two.

League leaders Linfield were held to a 1-1 draw by Carrick Rangers at the Belfast Loughshore Arena while second placed Larne also dropped two points in a 2-2 draw with Portadown at Inver Park.

Shane Lavery fired David Healy's side into an early lead against Carrick but Daniel Kelly levelled six minutes from time.

Larne were rocked by an early Ben Guy goal at Inver Park but they responded in style and went in 2-1 ahead at the break thanks to goals from Dylan Mottley-Henry and Ronan Hale.

Tiernan Lynch's side looked set to claim maximum points as the 90 minutes approached but Lee Bonis shocked the home side by levelling in the final minute of normal time.

In the only other game played on Tuesday, Cliftonville secured a comfortable 3-0 win over visitors Warrenpoint Town at Solitude.

The only downside for the Reds was the late dismissal of defender Jamie Harney, shown a straight red card by referee Steven Gregg following an altercation with Daniel Wallace.

The Warrenpoint Town man was himself sent off for an incident involving Chris Curran.

Aside from Glenavon v Coleraine, the games between Dungannon Swifts and Crusaders and Glentoran's game at home to Ballymena Utd were postponed.

The midweek action sees Linfield remain at the top of the Danske Bank Premiership with 38 points from 17 games played.

Larne remain in second but missed the chance to close the gap on their Belfast rivals and they remain five points behind the Blues having played the same amount of games.

Crusaders are in third place on 30 points, having also played 17 games.

In fourth and just outside the European places are Coleraine.

Oran Kearney's side are on 27 points but have played a game less, 16, than the three teams above them.

Cliftonville are two points behind the Bannsiders on 25 but have played two games more while Ballymena Utd complete the top six on 25 points from 18 games.

The action is set to continue this weekend - weather permitting - with a full range of fixtures.

Ballymena Utd host Linfield, Crusaders are at home to Carrick Rangers, Coleraine travel to Glentoran, Portadown and Cliftonville meet at Shamrock Park while Warrenpoint Town and Glenavon clash at Milltown, all at 3pm.

There is one game at 5.30pm as Larne welcome Dungannon Swifts to Inver Park.