Portadown visitors to The Showgrounds 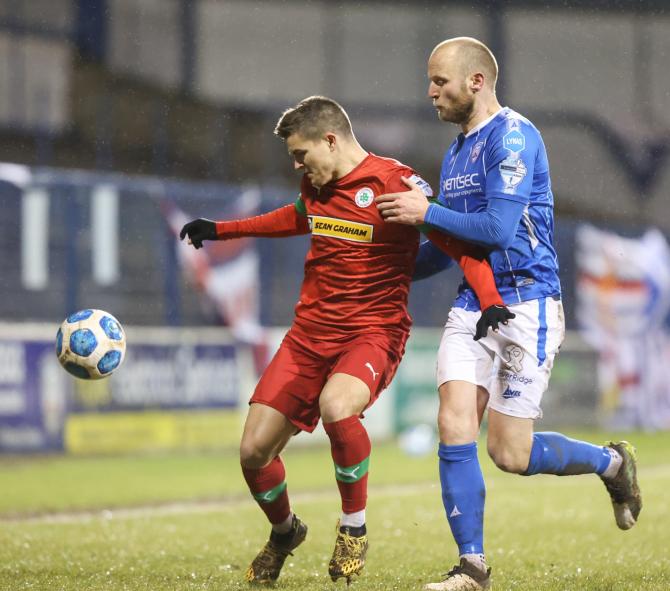 Coleraine defender Gareth McConaghie picked up an injury during Tuesday's draw with Cliftonville.

BANNSIDERS' boss Oran Kearney will check on the fitness on a number of players before naming his side for Saturday's Danske Bank Premiership clash at home to Portadown.

Of particular concern will be the central defensive pair of club captain Stephen O'Donnell and Gareth McConaghie.

The Derry man missed Tuesday night's 2-2 draw against Cliftonville after picking up a hamstring injury in the win over Crusaders while centre-back partner McConaghie was seen hobbling away from the ground in midweek.

Should either, or both, fail to recover in time, Howard Beverland, a late sub' against the Reds, could earn a rare start and partner Aaron Canning in the centre of defence.

The full-backs are likely to remain the same, Lyndon Kane and Aaron Traynor, but there could be changes in midfield again as the manager rotates his squad.

Aaron Jarvis and Stephen Lowry manned the central positions on Tuesday with Evan Tweed and Josh Carson making way from the Crues game.

Up front, too, could witness a freshening up. Eoin Bradley and Curtis Allen didn't see any action during the week and may get the nod on Saturday at the expense of James McLaughlin and Stewart Nixon.

The 2-2 draw against Paddy McLaughlin's new-look Cliftonville extended Coleraine's unbeaten run to seven games and was the first time they hadn't won since losing to Dungannon in early December.

The aim now will be to start winning games again though Oran Kearney is expecting a stern challenge from the mid-Ulster side.

"Portadown have done really well and have had some good results," he says.

"They're just not getting the rub of the green at the minute.

"The key thing for us is we've got to put the Cliftonville result behind us and go out on Saturday and try and get another three points.

"It's tough enough on players when you have a midweek game and you notice it maybe that second Saturdayso to keep going midweek to midweek makes it even tougher.

"We need a big squad and we're gonna need everybody.

"We got Stevie off in good time last week so we're hoping that it'll be a quick enough turnaound and we're hoping Gareth's not too serious either."

The final game of matchday 13 of 33 comes at Seaview where Crusaders and Linfield meet in front of the BBC NI cameras.

And just a reminder that Coleraine's game against Matthew Tipton's Portadown will be - as with all other previous home games this season -  streamed live.