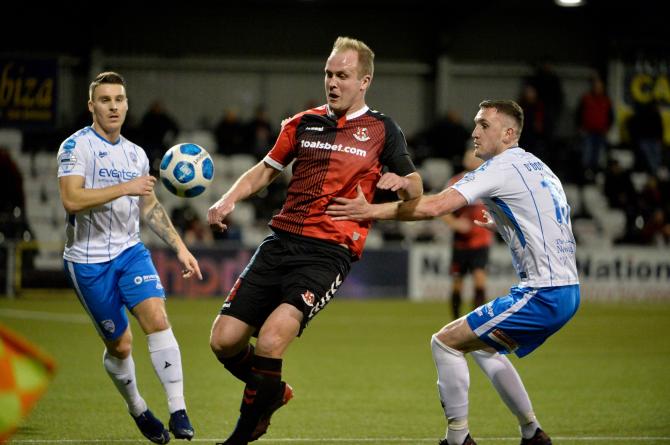 Jordan Owens scored the only goal of the game as Crusaders won 1-0 at Seaview back in November.

COLERAINE will close the gap on opponents Crusaders to just two points - and with a game in hand - with victory at The Showgrounds on Saturday.

The home side go into the game in great form, having won their last five games in succession, including a hard-earned 2-1 victory at Larne in midweek.

In contrast, Crusaders come north having drawn their last three games, including a 2-2 scoreline at Portadown on Tuesday.

Stephen Baxter's side won the previous meeting 1-0 in north Belfast back in November thanks to a Jordan Owens goal on a night when the visitors feel they should have taken a point.

That reversal, though, came during a difficult period for Oran Kearney and his players, a combination of injuries and suspensions badly affecting his squad.

Steven Douglas was pressed into action that night and, while he performed admirably, it was a big ask of a 43-year-old to go up against the likes of Owens and Heatley et al in their own back yard.

Since that night, the Bannsiders have welcomed back most if not all of their absent players, Ben Doherty and Adam Mullan notwithstanding, and results have improved dramatically as a result.

Aaron Traynor and namesake Aaron Jarvis, both named on the bench for the game at Seaview despite not being fully fit, are regular starters again while Aaron Canning has made a welcome return to the fold.

He began Tuesday evening's game against Larne as part of a formidable back three alongside his captain Stephen O'Donnell and Gareth McConaghie and looks like he's never been away.

Indeed, such is the wealth of talent at his disposal, that for the first time in a long time, manager Kearney is able to rotate his squad.

Eoin Bradley, a late sub' at Inver Park, may have been rested with one eye on Saturday, while the same may be true for Josh Carson as he continues his comeback from injury.

That strength in depth, a feature of top sides in any league, is a key component of any team challenging for silverware, teams like the Crues for example.

They moved during the week to sign defender Daniel Larmour from Glenavon and are never shy when it comes to adding to their panel.

That said, manager Stephen Baxter still relies on those he knows and trusts, players like Owens, Paul Heatley, Declan Caddell and Jordan Forsythe.

And they will no doubt form the nucleus of the side which starts tomorrow afternoon's eagerly anticipated clash, looking to improve some indifferent away form.

Difficult to beat on their own patch, Crusaders have lost eight and drawn two of their last 12 away games.

They have been scoring heavily recently, notching up 16 goals in their last five, but worryingly for Baxter they have been coughing up goals at the other end where they have conceded seven.

Gareth Deane continues to impress in goals where he provides a calm assurance behind one of the league's tightest defensive units. Whether a back four or a back three you have to earn your chances against Coleraine.

I said on Tuesday, as subs Eoin Bradley and Josh Carson helped secure the points at Larne, that the Bannsiders must be a horrible team to play against, and I meant that as a compliment.

They are the perfect blend of toughness, experience and skill, a mirror image almost of Saturday's opponents.

Because of that likeness, games between the two are often close and tomorrow may see that trend continue.

The hosts, though, appear to hold the upper hand. They look to have overcome their early season sticky patch and are strong in all departments.

The visitors have stumbled a little of late, picking up just three points out of a possible nine, but remain dangerous opponents with plenty of firepower at their disposal.

Key to this game will be how Coleraine handle Jordan Owens. Keep him quiet and you go a long way to nullifying the Crusaders' threat.

With the carrot of gaining ground on their opponents, and with Linfied inactive after their game against Dungannon Swifts was called off because of Covid-19, the incentive is there to go and claim the three points.

I fully expect them to do it.