All six games to go ahead as scheduled 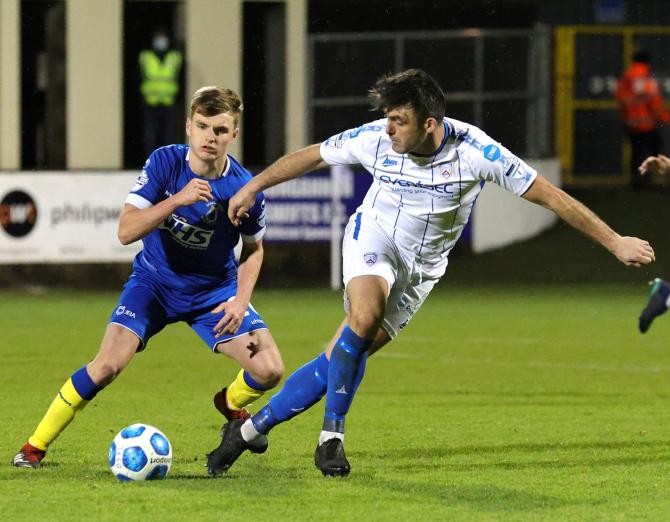 Dungannon defeated Coleraine 2-0 when the sides met back in December.

THE NI Football League is pleased to advise that all six Danske Bank Premiership fixtures will go ahead as scheduled tomorrow (Saturday, January 23).

“We would like to thank clubs for their continued cooperation in supporting and implementing Covid-19 protocols to ensure a safe return to football for all players, coaches and officials,” said Neil Coleman, NIFL’s Marketing and Communications Executive.

Coleraine players, along with colleagues at the other 11 Danske Bank Premiership clubs, underwent Covid-19 testing on Thursday in line with guidelines.

With a clean bill of health, they now look forward to welcoming Dungannon Swifts - the last team to beat them - to the Showgrounds on Saturday afternoon at the start of a busy week.

One of the league’s in-form teams prior to the enforced break, the Bannsiders had responded positively to defeat at Dungannon in early December by winning their next three games.

That Friday night performance at Stangmore Park is probably one where Oran Kearney’s men were pleased that there were no visiting fans in attendance.

To their credit, they regrouped in great style, defeating Warrenpoint Town next time out and completing a hat-trick of wins with victories over Cliftonville and Carrick Rangers.

Suddenly, the league table is looking a whole lot healthier. The Bannsiders currently occupy sixth place, having amassed 16 points from 11 games played, two head of Glentoran who have played the same number of games.

Crucially, though, they are just a single point behind Cliftonville who have played two games more.
And they also have a game in hand on Ballymena Utd in fourth place on 20 points and Crusaders in that all important European place in third on 25 points.

This week promises to be a pivotal one, particularly if the league is to be curtailed early because of the ongoing coronavirus pandemic.

The action kicks off early on Saturday, with third-placed Crusaders hosting second-placed Larne at Seaview at 12.30pm in what is arguably the game of the day. Just a point separates two teams with designs on lifting the Gibson Cup and a win for either side could be critical in the ongoing title race.

Both teams might be content with a point apiece, though, so don’t be too surprised if the game ends in a draw.

Elsewhere, Linfield will expect to maintain their place at the head of affairs with a home win over Warrenpoint Town while Ballymena Utd and Cliftonville is another of the day’s big games. Carrick Rangers will target their home fixture against Portadown as one they can take something from while Glenavon and Glentoran complete the day’s action with the evening game at 5.30pm.

Three days later the clubs are back in action and again there are some big games in store, none moreso than Larne against Coleraine at Inver Park. The Reds won 2-0 at Coleraine at the end of November and a second successive win would see Tiernan Lynch’s men increase the gap on their opponents.

However, Oran Kearney’s side have enjoyed their recent visits to the port town and there’s no reason to think it will be any different in midweek.

On the same night, Dungannon host Glenavon, Portadown take on Crusaders at Shamrock Park and Carrick Rangers travel to the Oval to face Glentoran. Warrenpoint Town at home to Ballymena Utd and Cliftonville at home to Linfield are the remaining fixtures.

The third game of a busy week for top flight clubs comes on Saturday and they don’t get any less exciting for the Bannsiders.

Crusaders are the visitors to the Ballycastle Road and they will travel north looking to complete a double over their opponents having won 1-0 at Seaview at the start of November. Coleraine actually competed well that evening, one defensive lapse allowing Jordan Owens in for a trademark goal to break the deadlock and secure the three points.

The previous evening (Friday), Larne and Glentoran get the weekend action underway.

As well as Coleraine against Crusaders, next Saturday features Cliftonville at home to Glenavon, Portadown against Warrenpoint Town, Linfield hosting Dungannon and Carrick at home to Ballymena Utd.

It promises to be an intriguing week in the race for the Danske Bank Premiership title and the all important European places.

Critically, Oran Kearney should be able to call on almost all his players this week. Those players carrying knocks prior to the break are expected to be near enough recovered, including the likes of January transfer window signing Matthew Shevlin. Midfielders Aaron Jarvis and Josh Carson should  be fit to play some part in the triple-header with defender Howard Beverland also edging towards full fitness.

Ben Doherty, however, remains out long-term with a broken collar bone while this week may have come just a little too early for long term absentee Adam Mullan, though he is reportedly showing up well in training.

Finally, Aaron Canning, who made a welcome reappearance from the subs’ bench in the win over Carrick Rangers at the start of this month, is a welcome return to a squad which looks to be getting stronger at just the right time.