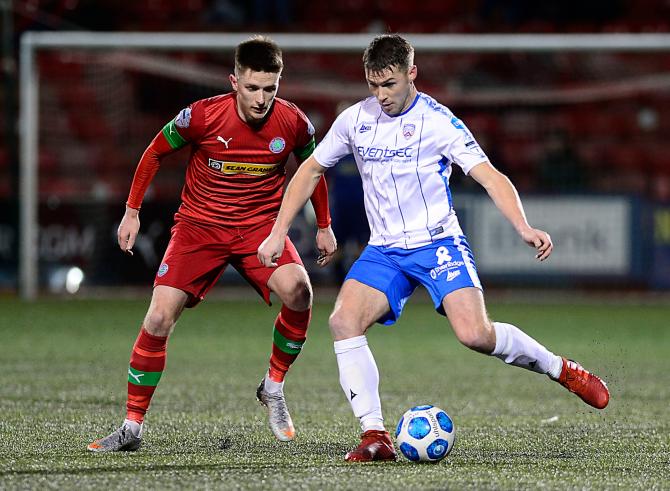 COLERAINE face playing seven games in 29 days as the season resumes this weekend.

The busy post festive period begins with a home league game against Carrick Rangers this Saturday and concludes with a game against Crusaders at The Showgrounds on January 30.

In between times, they will take on the league’s top two teams, Larne and Linfield, as well as derby rivals Ballymena Utd in a game postponed from its traditional Boxing Day date and which will now take place next Saturday (January 9).

One game not taking place, at least for the forseeable future, is the Irish Cup fifth round tie against Crusaders.

That game, along with the other ‘Round of 32’ games, was to have been played on January 9, but doubt has been cast over the future of the competition.

It has emerged that the Sadler’s Peaky Blinders Irish Cup and the NIFL Championship will not commence in January as originally scheduled after the Department for Communities and Sport NI confirmed they cannot support the request to have the competitions delivered under ‘elite’ protocols.

Patrick Nelson, CEO of the Irish FA, said it was disappointing that the Irish Cup games were being stalled. “This is a year in which, like many things, our game has taken a huge hit,” he said.

“There has been a toll on both the physical and mental wellbeing of many in the game at all levels. We are acutely aware of this.

“Whilst we are disappointed, we understand this decision has been taken with the broader health, safety and wellbeing of everyone both in, and outside, of the football community in Northern Ireland in mind.

“We have engaged consistently with the Northern Ireland Executive to make the case for these competitions to get underway with enhanced protocols but acknowledge that this simply won’t be possible in the timeframes scheduled.

“Our dialogue with the Executive and our member clubs will continue, and our staff will be working hard behind the scenes to ensure we are ready to deliver these competitions when the restrictions allow,” he added.

Back on the pitch and Oran Kearney’s men will be looking to complete a hat-trick of wins when they host Carrick this Saturday.
The Bannsiders are beginning to gather some welcome momentum following victories over Warrenpoint Town and Cliftonville as we enter the second part of the campaign.

New signing, striker Matthew Shevlin, may be in line to make his debut for the club after signing from Linfield in midweek but it is expected Kearney will go with the starting XI which defeated Cliftonville so comfortably before Christmas.

A number of the club's long term injury absentees are also nearing a competitive comeback, just the tonic ahead of what we already know is a congested New Year schedule.

Saturday's game is, of course, being played behind closed doors but the game will be streamed live via the usual outlets. Check the club's website for further details.