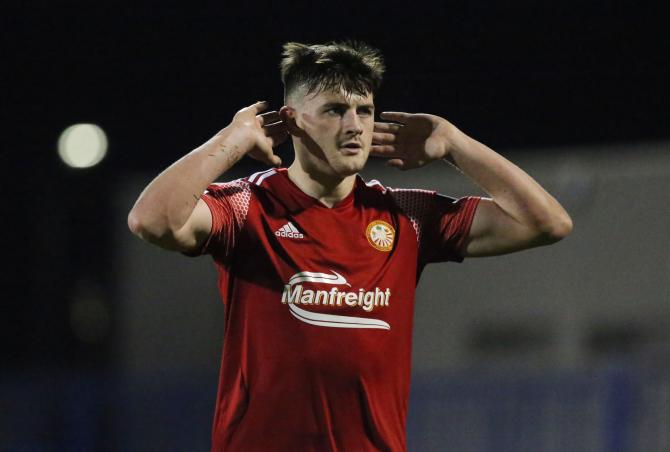 Lee Bonis was among the goals as Portadown defeated Glenavon on the opening day of the new season.

PORTADOWN FC officials say they hope streaming matches live - beginning with Saturday's visit of Coleraine - will go some way to softening the blow for supporters unable to attend Shamrock Park.

The mid-Ulster club has been given a Covid safe capacity of 438 patrons by Armagh, Banbridge and Craigavon Borough Council, covering the main home stand and the away stand at the Armagh Road end of the ground.

That has prompted the Ports to press ahead with plans to live stream all NIFL Danske Bank Premiership matches from Shamrock Park that are not already being shown by external providers (BBC & Sky Sports).

The Ports TV live stream will be available through platform providers 247.tv with all production being created by Ports TV themselves including match commentary, instant replays, match graphics, half time features and everything you would expect from any top of the range Sports TV Broadcast.

The club has made a significant investment to bring such a solution in-house to Shamrock Park and it is hoped that the match commentary will feature an analyst alongside the lead commentator each week with numerous ex-Ports players lined up to feature on the channel.

This service will cost £7 per live stream and will be available through 247.tv. There will also be a Video on Demand (VoD) stream available for £3 that will be watchable after the stream has finished.

"A lot of hard work has gone into getting this set up from guys like Matt Gregg and Matt Wright who will be working hard throughout the process to bringing you as much of a top end service that we can," explained Mark Beattie from Ports TV.

"We ran a test live stream on our last training game and it went as smooth as we could have hoped so we are confident in being able to deliver a product that Portadown FC can be proud of.

"We know this is a strange time, not just in the football world, but we hope having this service available will go some way to soften the blow of not being able to fill out Shamrock Park on match days and bring the Ports to you in your living room or where ever you are at that time," he added.