Coleraine through in Europa League 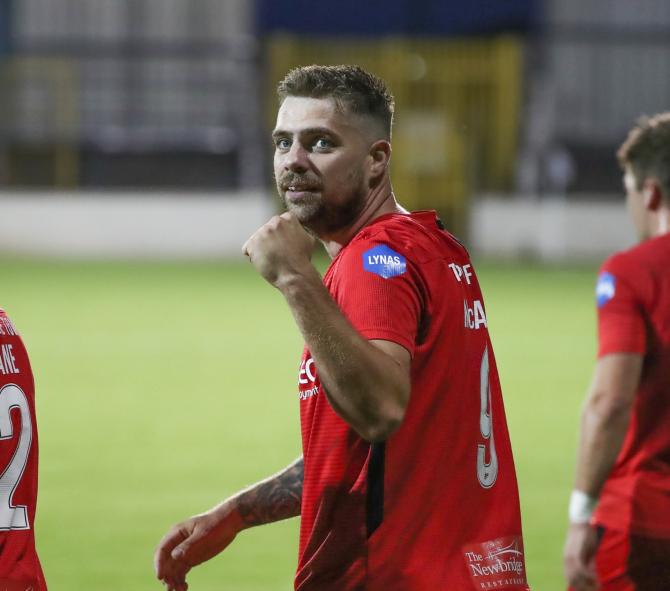 James McLaughlin was the Bannsiders' hero with a last minute winner against La Fiorita of San Marino.

COLERAINE left it late to book their place in the first qualifying round of the Europa League on Thursday evening - James McLaughlin firing home the winning goal a minute from the end of a nervy preliminary round tie against San Marino side La Fiorita.

It was no more than the Bannsiders deserved on a night when they dominated, creating the majority of the chances.

But they were frustrated for long periods by their opponents, limited they might have been going forward but always resolute in defence.

Oran Kearney's men created a number of openings in the first half but with limited competitive action since March they were left to rue missed chances.

Their frustration was apparent, the hosts picking up two bookings in the space of three first half minutes.

First, midfielder Josh Carson received a yellow card following a tussle with his marker Simone Errico inside the La Fiorita goalmouth at a Coleraine corner before Aaron Traynor joined him in the referee's notebook following a foul on the halfway line.

A minute later and Ben Doherty tried his luck from distance but his shot went narrowly past the post as well.

Coleraine forced a first save from keeper Gianluca Vivan in the 23rd minute when the stopper got down well to block Carson's right foot effort.

La Fiorita looked content to soak up the Coleraine pressure and hit on the counter attack and they showed glimpses of their pace just after the half hour mark, a poor final pass putting paid to their chance of a breakthrough.

Two minutes before the break and they went closer still, Armando Amati's cross-shot narrowly missing the target but the teams went in goalless at the break.

And Nixon it was who set up James McLaughlin with a great chance in the 67th minute, pulling the ball back into the striker's path following a pin point kick-put from Gareth Deane.

McLaughlin caught the ball sweet but could only hold his head in his hands as La Fiorita keeper Gianluca Vivian reacted brilliantly to dive to his left and parry the ball away to safety.

Eoin Bradley replaced Curtis Allen with around half an hour remaining and his influence was critical as the game wore on.

With the minutes ticking by, Coleraine lad siege to their opponents' goal but just couldn't find a way through.

Until, that was, James McLaughlin conjured up what his manager later called a 'bit of magic' to send his side through to a money-spinning tie against the Slovenian kingpins.

The striker produced a sublime piece of skill to control the ball and at the same time create the shooting opportunity which he did, the ball billowing in the corner of the Railway End goal.

It was a goal fit to grace any game - the only disappointment that there weren't hundreds of home supporters packed in behind the net to see it.

But that was just a minor disappointment on a famous night for Coleraine, a club with a proud record in European competition.

Thursday evening can be added to that history.

And, who knows, perhaps there is more to come...