Bannsiders' boss looking to kick on

Manager and players determined to put cup defeat behind them 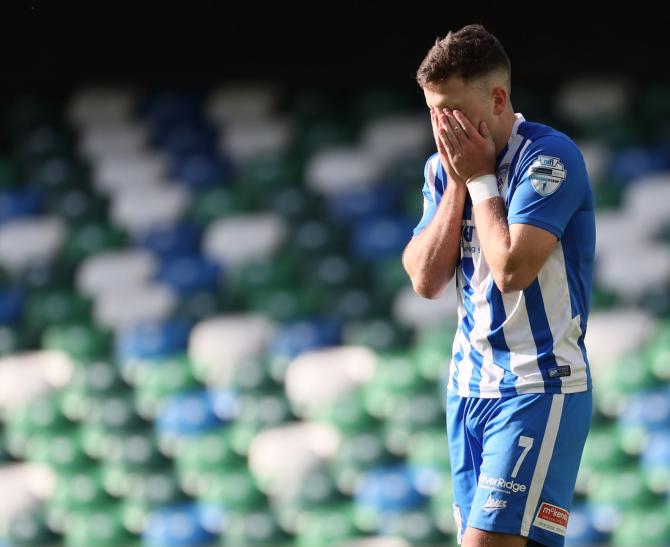 COLERAINE manager Oran Kearney has hinted at movement in the transfer market as the club seeks to move on from Monday's Irish Cup semi-final defeat.

The Bannsiders appeared to struggle in the closing stages of the defeat to Ballymena Utd with injuries and tiredness taking their toll on an understrength squad.

In contrast, their opponents benefitted from significant second half substitutions as they came from behind to win on penalties.

“There will be movement of players, and ideally movement in, the key thing is to make sure we recruit well and leave ourselves strong," said Oran in the wake of the game.

“Missing Curtis Allen and Stewart Nixon hurt us in relation to the last period of the game having fresh legs.

“It’s well known we don’t have a big squad and it hurt us moving into extra time," he added.

The 2018 Irish Cup winners looked to have done enough to claim a third final appearance in four years but coughed up a late equaliser before the heartache of spot-kicks.

“We’ll hurt for the rest of this week, but we’ll kick on from it," continued Oran.

“We will probably give the guys a few days off now and come in and do a light session on Saturday.

“We’ll crack back on again next week.

“We are probably halfway through pre-season as such, but eyes will quickly turn to August 20 and Europe.

“We’ve had great experience in Irish Cup over the last few years.

“We had a final defeat to Linfield which we had to learn from, and this will be the same whether you like it or not.

“I thought we had done an A1, professional job right up until the 95th minute or whatever it was,” he said.

“It’s different if there’s an onslaught for 15 or 20 minutes, but I think that was their first shot on target.

“I thought the way the boys had adapted and we had got our goal it was everything that we wanted it to be.

“Also we were seeing it out in the correct manner. There was no onslaught or big scares, everything was going to plan.

“It just seemed there was two or three second balls in a row, then all of a sudden before you know it the ball is in the back of the net.

“I have to pay big credit to the players, because you talk about momentum swings and everything else in football, Ballymena are cock-a-hoop and our boys are down in the dumps.

“But I thought our response, particularly in the first half of extra time showed a huge amount of character and endeavour to go and flex our muscles again and show that the tie wasn’t over.

“It was the same in the second period, and when it goes to penalties it is what it is.

“We put three of our renowned and best penalty takers first.

“I’ll never shout, and I said that to the players afterwards, I will never fall out with anyone for having the courage to step up and take a penalty.

“We’re just disappointed with the manner of the game, we had got it right to that point where it looked so comfortable it looked like we were there, but that’s cup football."