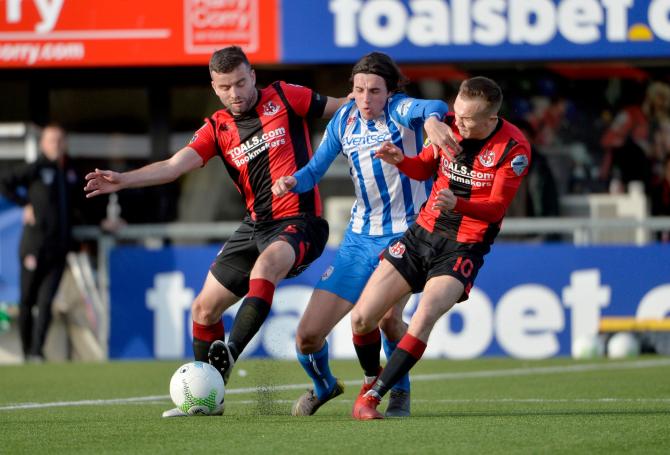 COLERAINE manager Oran Kearney says he and his players will be treating Sadlers Peaky Blinders Irish Cup opponents Banbridge Town with the 'utmost respect' when they visit The Showgrounds for a sixth round tie on Saturday.

Kearney, who led the Bannsiders to Irish Cup glory in 2018, knows his Danske Bank Premiership high-flyers start as huge favourites but is refusing to underestimate his opponents.

“We will be treating Banbridge with the upmost respect," said the Ballymoney man.

“The Irish Cup is a competition we want to do well in and we got through a tough tie against Glenavon to get here.

“We want to go at it all guns blazing.

“I know Stuart well and, for as much as he'll want to come up here and enjoy the day, he has a lot of football pride about him.

"He is a good guy and a good coach so we need to make sure we are right on it," added Oran.

The county Down side currently lie bottom of the Bluefin Sport Premier Intermediate League and are yet to win nine league outings.

However, manager Stuart King, a one-time Linfield team-mate of Winkie Murphy and Steven Douglas, is encouraging his players to go out and express themselves in what for many will be the biggest game of their careers.

"Our league form has been really poor but we've done really well to get this far in this competition - it's about 30 years since the club has reached this round," he said.

"To get drawn against Coleraine is phenomenal for the football club.

"We would hope to keep it tight for as long as possible but at the same time I want my players to enjoy the occasion and to go there and express themselves.

"I want them to show what they're capable of. You never know who's watching and it's a big opportunity for them," he added.

"It's great for me, too, as a young manager to pit my wits against someone like Oran. He's a model professional in everything that he does and I can only learn from going up against him and his team.

"Similarly, for my young players - they will probably learn more tomorrow, playing against the likes of Jamie Glackin and Stephen Lowry, than they will in however many league games."

The visitors will be backed by an estimated couple of hundred supporters, including two men with strong Coleraine links.

Former Coleraine Reserves player Davy Doherty, who played with NI manager Michael O'Neill during his time at The Showgrounds, and UUC stalwart Mickey Willis are both involved behind the scenes at the county Down club.

Both men are no doubt looking forward to returning to the north coast, if only for the day.

Keep up to date with scores and reaction from Saturday's game via The Chronicle.