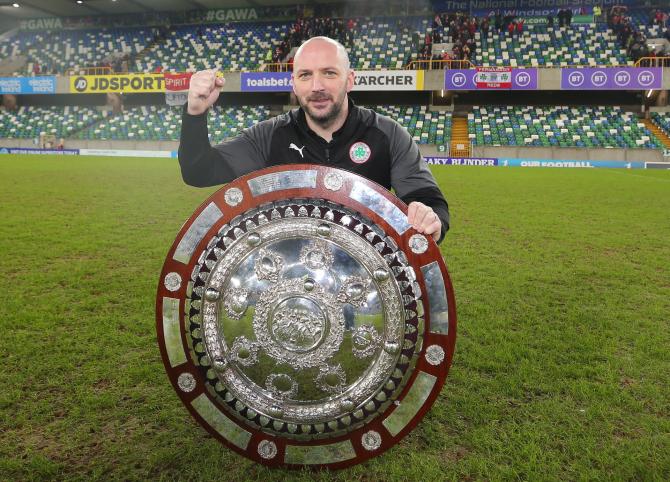 BALLYMENA United snatched defeat from the jaws of victory on Tuesday as they conceded two late, late goals to lose the Charity Shield final to Cliftonville in a dramatic night at Windsor Park.

United looked to have the win in the bag as the game entered the closing stages but referee Raymond Crangle's seven minutes of added time breathed new life into the Reds' challenge.

And when sub Thomas Maguire poked home an equaliser in the 96th minute it seemed as if the Belfast men had earned themselves an extra half hour.

Fellow sub Ryan Curran found the bottom corner of the net with a shot 60 seconds later to break Ballymena hearts and send the Red Army delirious.

It was a crazy end to a decent game in which David Jeffrey's side had taken the lead through Leroy Millar and had looked like holding on.

Until those final few dramatic minutes.

"Our boys emptied their heart out and gave us everything," said Reds' boss Paddy McLaughlin.

"To get the equaliser, we were happy just going to extra-time because the momentum would have been with us but to go on and get the winner, it's an incredible finish to a game.

"When we saw seven minutes, our players lifted themselves and pushed for the equaliser and then a winner. Two substitutes scored, people might joke that it was down to the manager. But all the credit goes to the players.

"They won it out there. We looked like we had a goal in us in those seven minutes of injury time. We finished the game strongly.

"It was a never-say-die attitude out there. The players refused to give in. All credit to them," he added.

Next up for the north Belfast side is a trip to Coleraine Showgrounds on Monday for a vitally important Danske Bank Premiership clash.

Both clubs remain firmly in the hunt for the Gibson Cup and a huge crowd is expected at Ballycastle Road for a game which will be shown live on Sky.

Cliftonville will go into the game brimful of confidence following the Shield win but know they can expect a stern examination from Oran Kearney's side.

Should be a cracker.