Rangers and County Tyrone to battle it out for the final 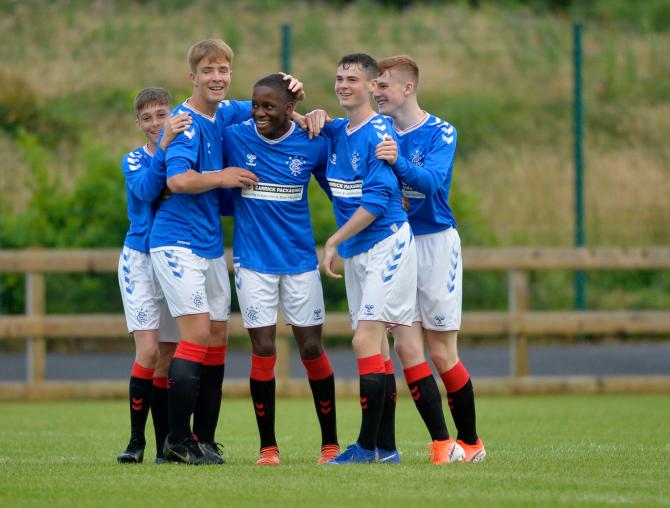 It was yet another goal crazy day in the SuperCup NI tournament as the group stage matches were completed.

There was a last gasp defeat for Celtic against County Tyrone in the Premier Section, with County Antrim's hopes of a third Junior Section crown ended by Pumas Unam.

In the Minor Section, Dungannon United Youth continued their 100% record and they will hope to reach the final but know they will be in for a tough clash against Ballymena United.

Dungannon United Youth won for a third successive game against Warrenpoint Town to set-up a last four clash against Ballymena United tomorrow afternoon. The other semi-final will see Glentoran take on Finn Harps at Seahaven, despite the Ballybofey side losing against Portadown this afternoon.

Last year's winners Greenisland will have to settle for competing for the Globe trophy but know they will have to be at their best to defeat Linfield. The other semi-final is an international affair as Beijing BFA lock horns with Global Premier Soccer at Castlerock.

Bertie Peacocks narrowly missed out on the Globe section but will aim for Vase glory as they take on Ballinamallard, with Glenavon against Ballyclare Colts the other semi-final.

Coleraine were beaten by Glentoran this afternoon and they will want to make amends against Larne in the Bowl section. Warrenpoint Town are still waiting to pick up a result at this year's tournament and they will face Portadown.

County Antrim's hopes of a third successive success in the Junior Section was ended by the impressive Pumas Unam at Anderson Park today. However, there is still hope for County Tyrone who will face in-form Rangers tomorrow night at the Coleraine Showgrounds.

Manchester United's tournament has failed to spark into life and they were defeated 2-0 by Charlton Athletic this afternoon. The Red Devils will face Cherry Orchard in the Bowl Section, with the Addicks facing Punas Umas in the other semi-final at Riada Stadium.

There is a potential of an all County final in the Globe section as County Antrim face with Arsenal, with County Londonderry set to take on Dundalk SL.

County Antrim will be flying the flag for Northern Ireland in the Premier Section tomorrow evening as they face in-form Newcastle United. The Toon have won all their games so far, including a 4-0 thumping of FC Edmonton this evening. The other semi-final will be an intriguing battle between La Liga debutants Valencia and 2017 winners Right to Dream at Riada Stadium.

Celtic's hopes of reaching the SuperCup NI finals were dashed by County Tyrone in an absorbing clash at The Showgrounds this evening, but they will seek revenge against the same opposition tomorrow night in the Globe semi-final.

There is an all County clash in the Bowl section as County Armagh face County Londonderry at Parker Avenue.