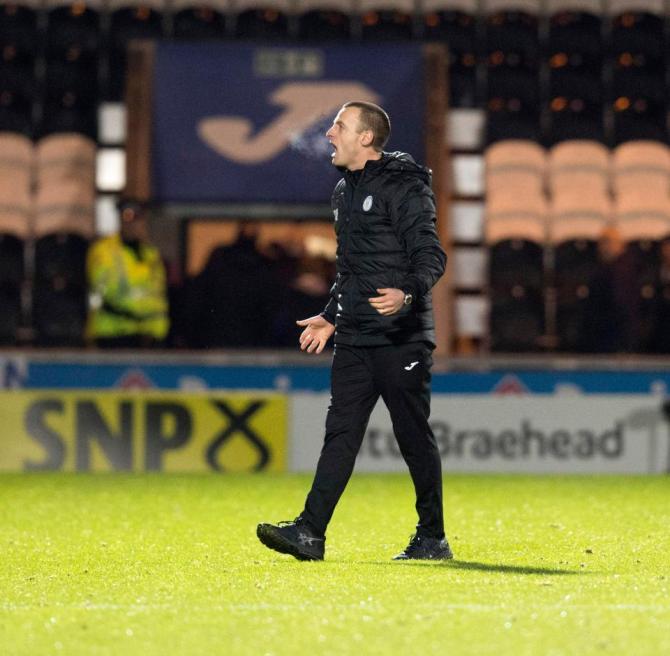 Former Coleraine manager Oran Kearney says he is happy at Saint Mirren where his only thought is on this weekend's final SPL game.

FORMER Coleraine manager Oran Kearney has dismissed speculation linking him with a dramatic return to The Showgrounds.

The 40-year-old Ballymoney man admitted he was happy at SPL club St. Mirren and that his sole focus was on Saturday's final league game of the season, away to bottom club Dundee.

The ex-Bannsiders' boss was pressed on his future after Monday night's 2-0 win over Hamilton Academicals following a number of press reports claiming he was in line to replace the departed Rodney McAree.

The Dungannon man left the club 'by mutual consent' over the weekend following a disappointing end to Coleraine's season in which they failed to qualify for Europe.

"I think that is the bandit that is social media," replied Kearney when asked about the rumours.

"I am here - I am loving it. I am hearing things, like families this and families that. From the word go I have made it known that my family are in Northern Ireland and I am here and I find a way to work with that.

"Coleraine is a club that is very close to my heart, of course, because I wouldn't be sitting here now if it wasn't for Coleraine.

"But in the same stretch I am here to do a job and I am very happy and I hope the club are happy with me," he added.

St. Mirren must defeat already relegated Dundee and hope St. Johnstone do them a favour by beating Hamilton if they are to survive a relegation play-off in Kearney's first season.