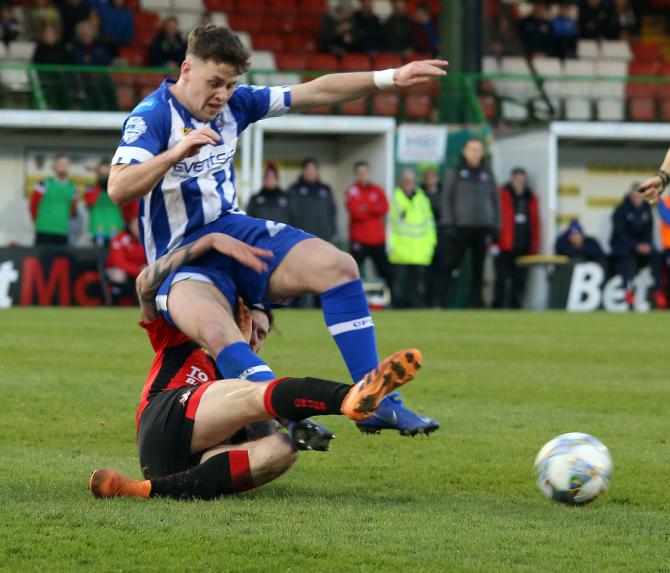 PRIOR to last weekend's Irish Cup semi-final clash with Crusaders it is fair to say everyone associated with Coleraine Football Club dreamt of another big day out in May.

'Three in a row' was the phrase on everyone's lips, but now, last Saturday's match officials replace that much talked about phrase. It seems to be an all too frequent occurrence in the Irish League that the level of officiating often becomes the focal point of games on a weekly basis and after a torrid display from messrs Marshall, Storey, Ross and Gregg the questions surrounding the scrutiny of officials have, once again, raised their head.

After a promising start from the Bannsiders it looked as if there was a glimmer that it might have been their day. Ben Doherty had the first opportunity as his rasping effort flew over before Josh Carson called Gerard Doherty into action inside the opening ten minutes.

Coleraine enjoyed some flowing passages of play in the early stages of the game but lacked a little quality in the final third.

This was almost their Achilles heel as Paul Heatley almost made Coleraine rue missed opportunities as he flashed an effort wide from the edge of the area before Jordan Owens fired straight at Chris Johns when put through on goal.

Stephen O'Donnell was left frustrated before the interval as he had a golden opportunity to hand the Bannsiders the advantage. The defender was afforded time and space inside the area but he could only glance Jamie Glackin's delivery wide of the post.