‘I have made friends, done some gossiping and lifted some amount of bins!’ 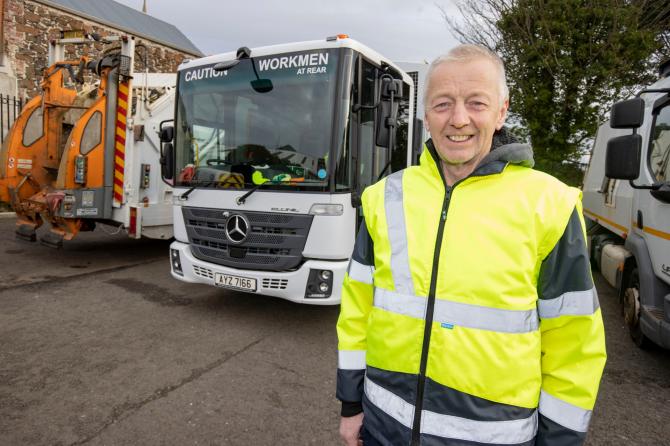 BALLYCASTLE man Hugh McGill is ready to enjoy some well earned sunshine as he retires from his role with Causeway Coast and Glens Borough Council.

Hugh, whose career as a bin man spanned four decades, said he will miss his colleagues but is ready to travel, make memories and get to work on wife Eileen's ever growing chore list!

Speaking to the Chronicle, Hugh explained how he took up work at what was then Moyle District Council on June 30 1980.
He said: “Back then, the bin lorries were parked at the old Inglis's bread store on Romoan Road, where the Eurospar car park actually is now. After a while we moved to McCaughan's old garage Market Street and that's where the lorries are still based.”

Alongside driving the bin lorry, Hugh worked as a retained firefighter out of Ballycastle station, but retired from there six years ago.

He said: “The bin work was heavy back in 1980. People then didn't leave their bins out. We had to go to their yards and lift them and often they'd be crammed full. And depending on the number of people in each house, there could often be more than one bin.
“I was fit and healthy working for the fire service too, but when you'd one of those heavy bins on your back and maybe it overflowing or full of ashes with a hole in it – you'd be in some state coming home.”

Hugh started as a relief driver back in 1980 and although he could drive a lorry, he freely admits he didn't know too much about them back then!

He added: “I was a relief driver for Mickey Laverty when I started and now Mickey's grandson works there.
“It's been nearly 42 years from I started and I genuinely enjoyed my work. No two days were the same, we met lots of people and made a huge amount of friends."