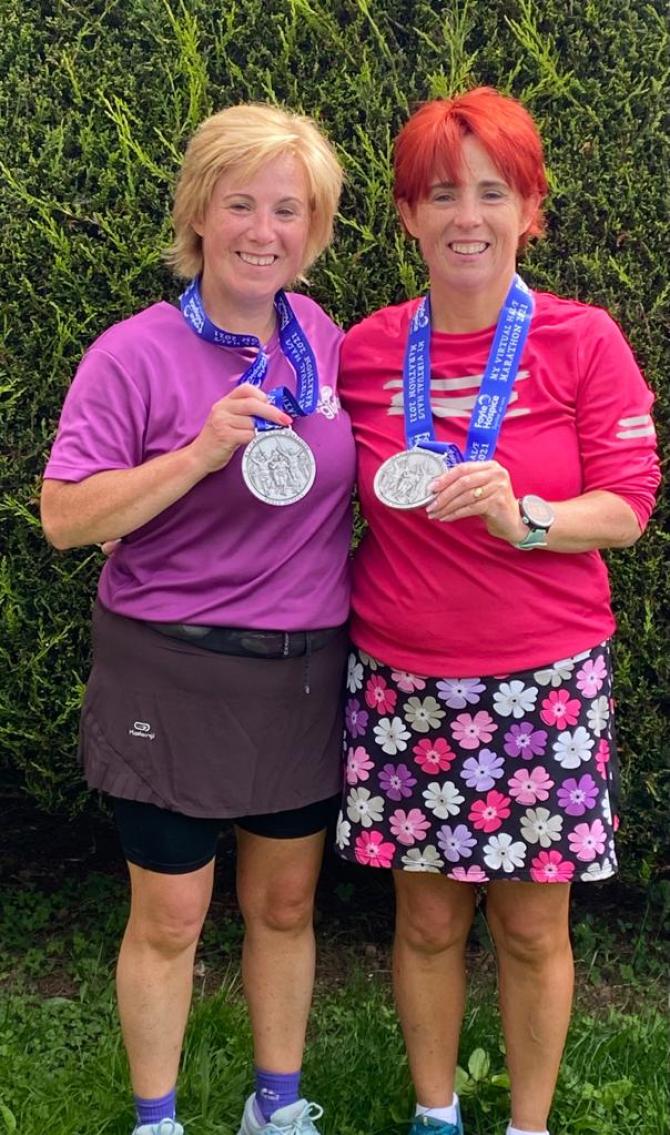 WHEN Cloughmills woman, Claire Martin, was standing in her starting pen at the beginning of the London Marathon, her thoughts were back home in Belfast, where her twin sister, Ann Johnston, was getting ready for her very first marathon!

When Ann decided four years ago to take on a new challenge in the form of running, she knew Claire would be her biggest supporter.

You see, Claire is no stranger to running, having undertaken almost 60 marathons to date, including ultras and 24 hour running events, she was only too happy to share her experience with her (slightly) older sister!

But last Sunday morning Ann would have to step out in The Deep RiverRock Belfast City Marathon without Claire by her side.. and it seems Claire was more nervous than Ann about that!

Speaking to the Chronicle, Ann, who lives in Maghera said: “I only started running in 2017 when we lost our youngest sister, Julie.  I was 49, about to turn 50 later that year.  Swatragh playgroup ran a C25K and I joined in with that, that led on to me wanting to run more.

“Claire has been the biggest inspiration, she was always giving me words of advice, even if she didn't realise she was doing it!”
So as Ann built up her miles, and their 50th birthday approached, the twins planned a trip to celebrate.

But this wouldn't be a holiday where they needed flip-flops, the pair of them packed their running shoes and Ann ran her very first half marathon on the morning of their birthday, in sunny Benidorm with proud twin sister Claire by her side!

Claire, who is a member of Ballymena Runners said: “We have done lots of ‘firsts’ together.  Ann’s first 5k was with me in Ballymena and we did the half marathon at 6.30am on the morning of our birthday – that was an unofficial one, but I was also there when Ann undertook her first official one.

That was in Derry, I was her pacer and she was the only person in the group to stay with me the entire way.
“I will never forget it, over the Foyle bridge Ann was right on my heels, I was immensely proud that day.”