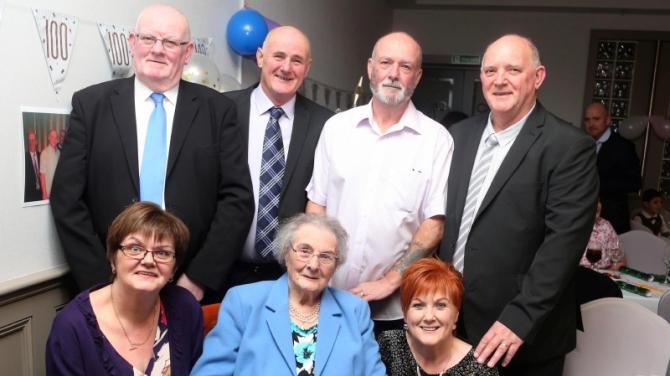 WELL known local woman Margaret Gillan marked her 100th birthday with a party at the Marine Hotel, Ballycastle, last weekend where she was surrounded by family and friends.

Margaret (nee Sweeney) grew up in Donegal and in her teenage years worked as a housekeeper to families in Strabane and Derry.

When she was 19 and hard at work in Letterkenny, she was was visited by a man from Loughguile who wanted housekeepers for the Co.Antrim village – so Margaret and a friend accepted the work and arrived in Loughguile soon after.

It was when working as a housekeeper for Paddy Casey that Margaret met her husband, Barney Gillan, and they married in 1943. The couple moved to Armoy, where Margaret still lives today.

Barney was well known in the area as he was a lollipop man at Armoy PS for years, and between he and Margaret they were kept busy with their large family of ten children, including a set of twins!

Sadly, Margaret lost Barney in 2010 aged 93 after a long and happy marriage. The majority of her children live nearby in Corkey, Armoy, Cushendall and Dunloy, with a number living in England.

As Margaret celebrated her actual birthday on Monday December 9, she was joined by the Mayor of Causeway Coast and Glens Borough Council who congratulated her on reaching the major milestone of 100-years old!