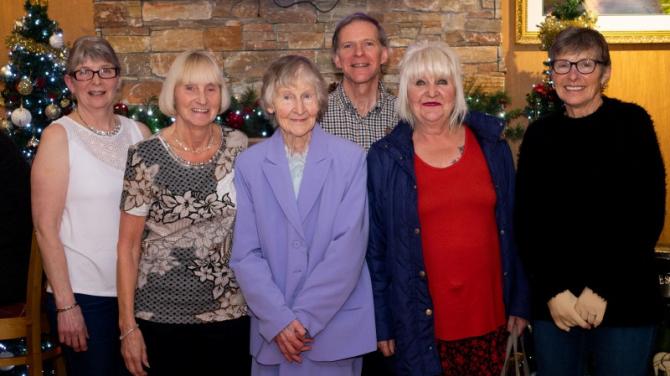 LOCAL woman Jean Knox had 90 good reasons to celebrate last week as family and friends filled the Scenic Inn outside Armoy to wish her many happy returns!

Jean, nee Hamill, grew up on the Lissanoure Estate not far from Loughguile and has many happy memories of playing in the beautiful castle surroundings where her father was gardener and chief vegetable grower!

Jean's daughter, Violet, told The Chronicle: “Mum moved to the farm on the Cregagh Road near Stranocum when she married my father and spent her days raising her family.

“She was always a keen baker and made bread and sweet treats for the farm workers. She still enjoys baking now and keeps busy making her pancakes, sodabread and fadge.”

The majority of Jean's daughters; Amanda, Violet, Anne and Prescilla live nearby in Bendooragh, Clough and Ballymoney, with one further afield in England.

Violet said: “Mum lives with James on the farm but she always has visitors and likes to keep up to date with the grandchildren and great-grandchildren – of which there are many and some as far away as Spain!

“But having all these family members help keep her mind active as she'll always ask after them and makes an effort at Christmas and on their birthdays. She's remarkable for her age, but it's not really a surprise as long life seems to be in the family genes. They had a sister died in her thirties of a condition she'd had all her life, but the rest of them had good long lives, living to their late 80's and early 90's. There's just mum and her younger brother left now, he is 81.

“She has all her faculties about her and we always say it helps her having someone to take care of, she likes making James tea and is still baking and cooking away. She has slowed down a little, but if can't do that when you're 90 then when can you?”

And although not all her grandchildren and great-grandchildren could make the party at the Scenic Inn, it's safe to say that Jean was well and truly surrounded by love and well wishes as she marked the very impressive milestone of her 90th birthday!