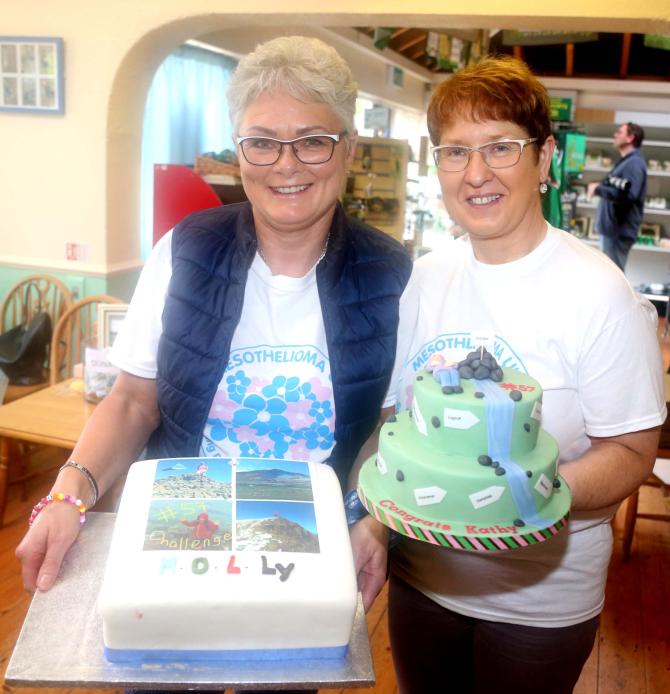 GLENARM woman Kathy Delargy has undertaken an epic challenge in memory of a number of loved ones who have lost their lives to cancer.
Over the last eight months, the Optometrist, who works at EyeConnection in the Frocess Medical Centre Cloughmills, has been hiking up the hills and mountains around Ireland, with Sunday being her 57th climb of her #57 challenge.
Speaking to the Chronicle, Kathy, a keen rider who frequently rides out with Ballycastle and Rural Riders and Antrim Chase and competes at show jumping competitions said: “The hills have been a Heinz 57 variety of different heights, duration and terrain. They have included The Connemara, Wicklow and Galty mountains along with our own Northern Ireland ones, with the final one in the Glens on Sunday past.”
Kathy is using her climbs to raise awareness of and money for three different cancer charities which are close to her heart.
She said: “Within 12 months I have had ten members of my family and friends diagnosed with cancer and only one so far has had a good luck story with the Lymphoma going into remission.
“The youngest is little Grace who has just turned seven-years-old and has been battling Leukemia. When she got her diagnosis I decided I wanted to continue the fundraising which I started last year for Leukemia and Lymphoma.
“My Mum had Leukemia and on initial diagnosis was given three days to live. This time there are two other Cancer charities included. These are Mesothelioma which my brother Owen died from at 57 years of age and Oesophageal Stomach which my Dad Thomas O’Kane died from when he was 51.
So why did Kathy, choose the name 'challenge #57'? She said: “My 57th birthday was on Sunday, October 6 and as Owen lived until he was 57, I thought this would be a good idea and pay tribute to my lovely big brother.”