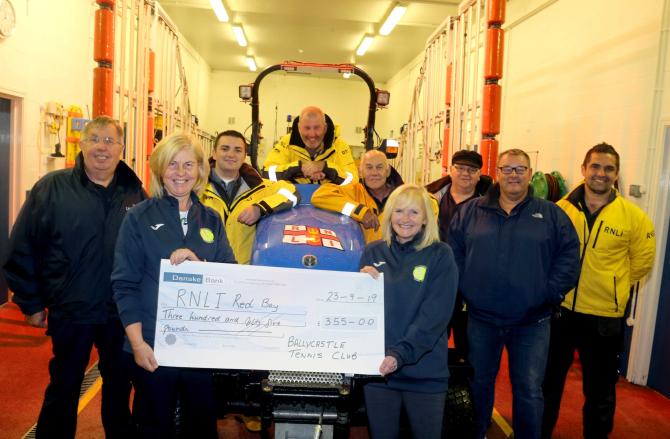 IN January 2019 Ballycastle Tennis Club were saddened to hear of the sudden death of John Bills while playing tennis in Belfast.
John was a very valued club member and played a significant contribution to club activities in his role on the committee.
He was a very fit active man and enjoyed playing tennis.
His death caused shock throughout the entire community.
John’s interest in sailing and the sea led him to become involved in the RNLI and he enthusiastically joined the crew of RNLI Red Bay in Cushendall where he also took the role of treasurer of the local branch.
It was, therefore, no problem for Ballycastle Tennis Club to decide which charity to nominate for their Annual Charity Night in the Grass this year.
John’s involvement with the RNLI meant it was unanimous.
Last Monday evening members of the Ballycastle club were honoured to be hosted at the Red Bay station in Cushendall by John’s colleagues in the RNLI.
They were given a tour of the station and watched the crew launching the life boat in very stormy sea conditions.
RNLI Red Bay is manned completely by volunteers and the tennis club members are very grateful for the warm welcome they received.
The volunteer crew are highly trained and committed to saving lives at sea.
Ballycastle Tennis Club are delighted-to be able to support this very worthy cause.