Eoghan Rua camogs complete a treble of All Ireland titles 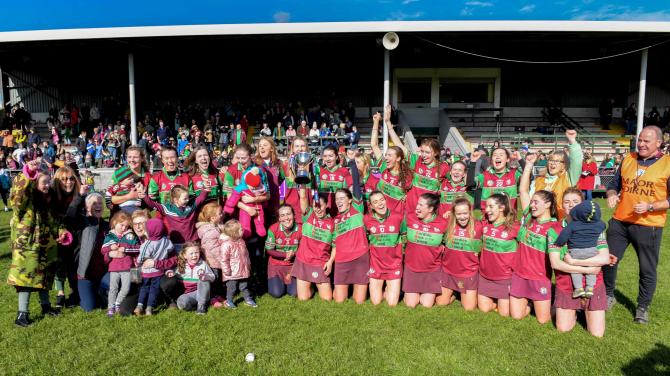 ‘CHAMPIONS of Ireland’ were the words ringing in the ears of the Eoghan Rua supporters as they made their way back north after watching their camogs claim All-Ireland glory with a one-point win over Clanmaurice of Kerry in a thrilling final at O’Raghallaigh’s GAA in Drogheda, writes Aodhán Ó Baoill.

Conditions were perfect for camogie, with a pitch in perfect condition greeted by glorious blue skies and a bright sun, with little or no breeze. The Eoghan Rua team lined out the same as they had in their victory over Athleague in the semi-final.
Finals are always a step up in intensity and this match was no different.

Any team that comes out of Munster are going to be strong and Clanmaurice brought physicality, sharpness and no little skill to a match that didn’t let up from start to finish.

Éilis McNamee and Kate Doherty stood out for the eventual winners in defence, with the class of Méabh Duffy and Gráinne Holmes, and the hard running and physicality of Megan Kerr and Katie Mullan having a huge influence on the game. Lucy O’Kane also stood out, often dropping back to pick up loose ball in defence.

Clanmaurice notched the first two scores of the game and it certainly took time for the Derry and Ulster champions to settle into the game. One thing that stood out about the game was the hooking and blocking of both sides. Clanmaurice were certainly the strongest side that Eoghan Rua had faced all year, with captain Patrice Diggin having a huge influence on opening proceedings.

Shauna Doherty opened the scoring for Eoghan Rua after a good run and pass from Katie Mullan and Rosanna McAleese then levelled matters up after great work from Megan Kerr - who was a contender for player of the match - in midfield.

Méabh Duffy sat back in the sweeper role and cleaned up a lot of ball for Eoghan Rua. However, the Kerry side were certainly on top in the opening minutes and went two points up before one of the defining moments of the game. Shauna Doherty won a ball out of a ruck and smuggled a handpass out to Katie Mullan.

The burners went on immediately and Mullan raced clear, firing the ball low to the corner of the net. This put the Coleraine side one point up and although the Kerry side soon levelled, Gráinne Holmes fired over two points from play.

Patrice Diggin was still getting a lot of the ball in midfield and in response to this the Eoghan Rua management moved Megan Kerr on to her. Megan’s power and direct running swung the battle in the midfield sector in Eoghan Rua’s favour and left the Ulster side one point up at halftime, 1-05 to 0-06.

The second half began in much the same way as the first, with Clanmaurice firing over the first two points to take the lead. Shauna Doherty repeated her trick from the Ulster final and clipped over a monster score to level matters. Clanmaurice went ahead once more before a free from Gráinne Holmes again drew the sides level.

Any time Katie Mullan got on the ball you had a feeling something was going to happen and so it proved as she shot Eoghan Rua into a lead they would not relinquish. Megan Kerr won the ball yet again and shifted it out right to Mullan. Her direct running caused the Kerry side problems all day and she tore away from two defenders to shoot over and put Eoghan Rua one up.

The defining period of the game was to come as Gráinne Holmes pointed from play, a free and again from play after a 45 had dropped short. Megan Kerr had gathered the ball in midfield and took off, getting away from a couple of Clanmaurice defenders as the field opened up before her. She fired a shot towards the top corner that the Clanmaurice keeper - impressive all day - saved brilliantly for a 45.

It was fitting that the final score on the Eoghan Rua side came from Gráinne Holmes. So many times she has been the hero for Eoghan Rua over the years. Collecting the ball on the right of midfield, she sidestepped a couple of challenges and soloed up the right-hand side before rocketing the sliotar over the bar from very nearly underneath the stand. The roar from the travelling support that greeted that score was the shout of a crowd that knew the battle was won.

Eoghan Rua managed to survive the concession of a last-minute goal before the referee John McDonagh blew his whistle. The Coleraine side had done it. Delirium from supporters, delight for management, tears from players.

Gráinne Holmes was named player of the match and finally Éilis McNamee got her hands on the Nancy Murray Cup.
For some of these players it was their third All-Ireland medal, for others their first.
These are the days of their lives.