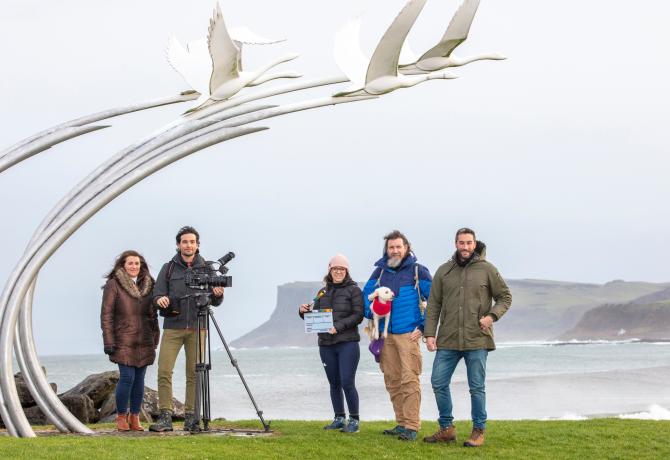 A CREW from RTVE La 2 – a TV channel in Spain – has been filming in Northern Ireland this week, as guests of Tourism Ireland and Tourism NI.

The TV crew’s action-packed itinerary included the Causeway Coastal Route and places like Glenariff, Cushendun, Ballycastle and the Giant’s Causeway. They also filmed around the historic walls of Derry and spent time in Armagh city and Downpatrick at some of the attractions associated with St Patrick. In Belfast, the crew checked out Titanic Belfast, SS Nomadic and HMS Caroline, before continuing to Hillsborough Castle and Gardens.

Barbara Wood, Tourism Ireland’s Manager Spain, said: “Tourism Ireland was delighted to invite RTVE La 2 to film in Northern Ireland this week. Each of the programmes they’re filming here will be seen by around 500,000 viewers, inspiring them to put Northern Ireland on their holiday ‘wish list’ for 2020 and beyond.

“Television and film are recognised as strong influencers for prospective holidaymakers and Tourism Ireland regularly works with TV and production companies, in Spain and elsewhere around the world, to facilitate the making of travel and lifestyle programmes and films in Northern Ireland.”