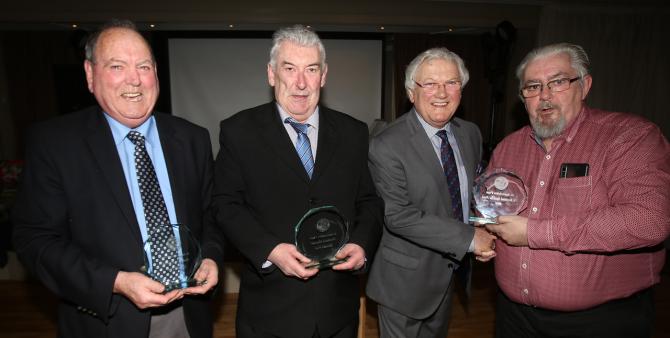 MEMBERS and supporters of the NI Special Pool Association have celebrated a memorable quarter of a century with a special anniversary dinner in Coleraine’s Lodge Hotel.

The evening was compered by guest of honour Jackie Fullerton, ably assisted by John ‘Hatchet’ McIlreavey, a man who enjoys a long association with the sport in the north coast area.

During the anniversary dinner, which was well supported and included visitors from as far away as Cork, NISP Chairman John Clarke welcomed everyone to the celebration.

It was also a special night for Trevor Harte, founder and former Chairman of the Northern Ireland Special Pool Association, who has been one of the principal organisers in local pool and international pool for almost 30 years.

Indeed, it was at his agreement, as chairman of the Northern Ireland Pool Association, that the Special Pool Tournaments were first introduced.

“Those events have become a tremendous success over the years,” explained Trevor.