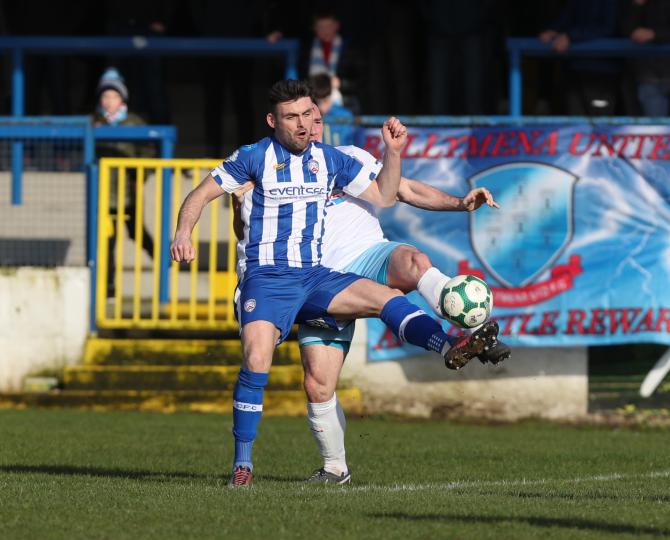 IT proved a weekend to forget for Coleraine as the Bannsiders slumped to a four nil home drubbing at the hands of bitter rivals Ballymena United.

Fresh from the plaudits of a spectacular Irish Cup comeback against Larne it was hoped that the buoyant Bannsiders could put a dent in Ballymena United’s title push but that proved to be a task too far. The result clinched Ballymena’s first victory at the Ballycastle Road since April 2015.

Coleraine almost made an immaculate start in the first minute as Ian Parkhill forced an excellent save from Ross Glendinning. Jamie McGonigle, who looked to have found his feet again, fired the ball low into the area from the right wing finding Parkhill, he fired the ball towards the top corner. But his effort was palmed away. Ballymena cleared and from the resulting corner Aaron Burns flashed a header wide.

The visitors mustered their first meaningful chance before the quarter hour mark as Jonathan McMurray threatened and on another day he could have fired United in front.

The bustling front man latched onto Andy McGrory’s through ball but his early shot was saved by an outstretched Chris Johns.

Coleraine were forced into an early substitution as Aaron Burns was withdrawn inside the opening twenty minutes with what looked like a foot injury after a meaty challenge with Ballymena’s Leroy Millar.